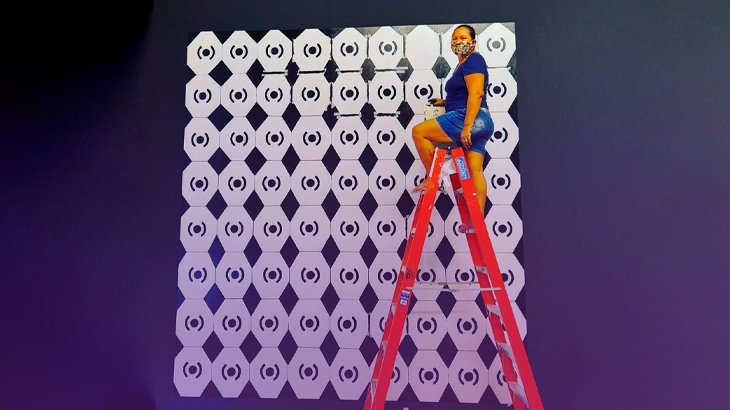 The Indigenous artist and activist Kaya Agari was born in Cuiabá, in the Brazilian state of Mato Grosso, in 1986. Since 2011, she has been dedicated to painting in several formats, inspired by the graphics and culture of her people. The Kurâ-Bakairi or Kurâ (a word in the Bakairi language that roughly translates as “our people”) produce body paintings and geometric prints that symbolize social roles and elements of their worldview. The body paintings, called kywenu, are taught by those who are older: from women to girls and from men to boys. There are exclusive kywenu for women, men, and children.

In 2015, Kaya was a co-organizer of the exhibition Kurâ-Bakairi: Yakuigady and Kywenu at the Mato Grosso Art Museum, which featured canvases, pictures, paintings, and other objects produced by Kurâ artists. She took part in other collective exhibitions of Indigenous contemporary art in the states of Minas Gerais and São Paulo, and also promoted workshops and took part in community activities to foster the culture of and major role played by Indigenous women.

Indigenous artists from different ethnicities shape and express their esthetic, spiritual, and social values. By addressing and defending their stories and memory, they propose collective rewriting Brazil’s art history. On this International Day of the World’s Indigenous Peoples, we share some of Kaya’s works and invite our readers to learn more about more Indigenous artists.

In Brazil, Indigenous peoples have been suffering sustained attacks encouraged by the Jair Bolsonaro administration and conservative sectors linked with agribusiness. Meanwhile, Indigenous resistance is organized in the territories and at a national level. Indigenous arts are expressive forces of this resistance, maintaining and rendering ways of living, traditions, spiritualities, and memories visible.

Words by Helena Zelic with support by Amanda Sammour

Documentary shows some of the thousands of women who make feminism in Brazil a continuous, organized, and grassroots movement.