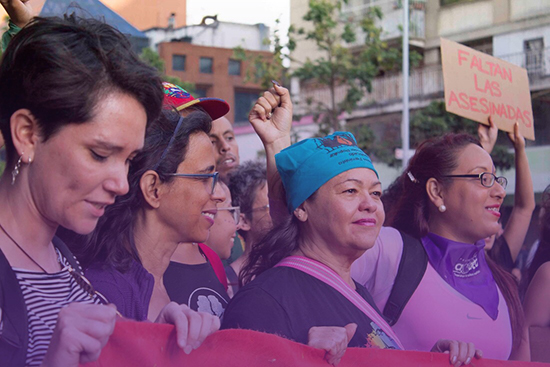 Gender inequality blatantly manifests itself as discrimination and economic oppression against women around the world. The feminization of poverty is conspicuous in all societies, but it is even more brutal in the impoverished regions and countries of our planet. Despite its self-determination project, Venezuela has not yet been able to overcome this reality.

According to a survey conducted in 2020 by a group of women academics, 75% of women said their productive activities have been affected amid the pandemic, especially economically (26%), highlighting that their income is insufficient due to inflation and daily food price hikes. They also mentioned the impacts of restrictions on movement and the inability to conduct on-site activities, aspects specifically related to lockdown measures (19%).

The survey “Women experiencing the pandemic in Venezuela” [Mujeres viviendo la pandemia en Venezuela] was conducted with the commitment and direct relationship with women’s movement practices. The group of researchers included feminist militants who are also university professors, with the participation of the Central University of Venezuela, the Bolivarian University, the Carabobo University, and the Institute for Scientific Research – which are connected with the Latin American Council of Social Sciences (CLACSO) – and the collectives The Feminist Spider [La Araña Feminista] and Women and Health in Aragua state [Mujer y Salud de Aragua]. They collected data over the internet in 2020 and completed the survey by the end of January 2021. The online forms were shared thanks to women’s networks across Venezuela, which helped them receive 530 filled-in forms, with answers coming from all regions of the country.

Work, Income, and the Power of the Dollar

Eight in ten women who responded to the survey said their productive activities are not enough to cover their family spending, and therefore many have more than one job as they need other sources of income. Among women who work on their own account (who carry out productive activities on their own or as part of grassroots community initiatives), 66% said their income is insufficient. Among them, 21% argue that their lack of income is due to inflation and the dollarization of the economy, while 15% mentioned movement and lockdown timing issues. The depreciation of wages and income amid rising inflation is the primary obstacle women feel and it has become aggravated as restrictions are imposed due to the pandemic.

Since 2015, the country has been experiencing a depreciation and crushing of most workers’ wages and income, at a level that makes the sustainability of life impossible. This situation has deteriorated since last year due to the pandemic. The minimum wage set by decree by the government as the reference pay for all workers in the country is currently at 10 million monthly bolivars, or US$3.20. This is what most people earn and it is the basis for all pay ranges.

The continuous depreciation of the Venezuelan currency and the de facto “dollarization” of resources and food has generated a restrictive wage policy supported by the alleged need to increase production first, then increase wages. This dollarization process is gradually setting prices of basic items and other products using dollars or bolivars, but based on the dollar exchange rate. Even at grassroots markets, vegetables, meat, eggs, and other food products are sold in dollars.

This topic is still being discussed, but the prevailing political guidelines argue that it is necessary to support foreign investments, especially from Russia, China, and Iran, which would put Venezuela in special economic zones. There are expectations that this would lead to reactivating and possibly adjusting wages, which is evidently farther away on the horizon.

Women who work in public offices and in healthcare are paid based on the national minimum wage set by the government. This is why, among women in formal employment, they are the ones who say their income is insufficient. On the other hand, women who work on their own account struggle to display and sell their products as their potential consumers can’t afford to buy them.

Only 25% of survey respondents work online, experiencing troubles with electric utilities and internet services. Internet services are provided by the Venezuelan National Telephone Company [Compañía Anónima Nacional de Teléfonos de Venezuela – CANTV], a state-run company that has a small national coverage and still faces many problems with its services. Over the past two years, several private companies emerged providing internet services, but all of them set their prices in dollar, with their least expensive package at 20 dollars, which is not compatible with the way of living of the Venezuelan people.

Food is a historically fragile sector in Venezuela, because the country’s economy has always been driven by oil, leading a huge number of peasants to leave their traditional activities. Even though policies have been continuously implemented in recent years to foster the country’s agricultural production, results have been meager.

Not only has it been difficult to encourage and establish people in agriculture, an import-based food policy is preventing the country to change its production and consumption logic. Most products move through Local Committees for Supply and Production [Comités Locales de Abastecimiento y Producción – CLAP], which distribute government-funded foods, but these products are not produced in the country, and food import tariffs have been eliminated. On the other hand, it is very hard to move agricultural products to cities, due to fuel shortages and the level of control of the organization and distribution structure. All these issues make basic products more expensive for households. In May this year, a basket with a month’s worth of basic products for a four-person household was estimated 296 dollars.

Among the women who took part in the survey, 48% said their food habits have deteriorated during the pandemic, while 54% said they know a family who is facing hunger and 25% said the access to food is one of the biggest struggles they face today. These numbers are high, and they also have to be looked at alongside the struggles to access basic services that are necessary to get and prepare food. In this sense, the most common issues mentioned were the lack of access to gas, reported by 36% of respondents, and water and electricity shortages, reported by 30% of respondents. Moreover, transportation-related issues, such as the lack of access to fuel and public transportation, affect 43% of the women who participated in the survey.

“How Do You Feel During Quarantine?”

When responding to this question, the most common word was “overwhelmed,” followed by “nervous,” “stoic,” “sad,” “afraid.” Among respondents, 80% affirmed domestic and care work has increased significantly, especially as they take care of children, teenagers, older adults, and people with disabilities. This work is carried out under precarious conditions in lockdown.

As we face this reality, we have been discussing and implementing an agenda of feminist and workers’ struggles. Part of this agenda includes restoring wages, which will reactivate the economy in general. We believe that supporting grassroots productive initiatives is fundamental, not only through credit, but also through purchases by the government so that the Venezuelan population can consume what is produced by the people. Improving public services to really support productive initiatives is paramount.

Alba Carosio is a member of The Feminist Spider network [La Araña Feminista], a platform established in 2010 bringing together autonomous feminist social movements from Venezuela. She is a researcher and a professor and is part of the Center for Women’s Studies at the Central University of Venezuela. She coordinates the Working Group Feminisms, Resistances, and Emancipation of the Latin American Council of Social Sciences (CLACSO).