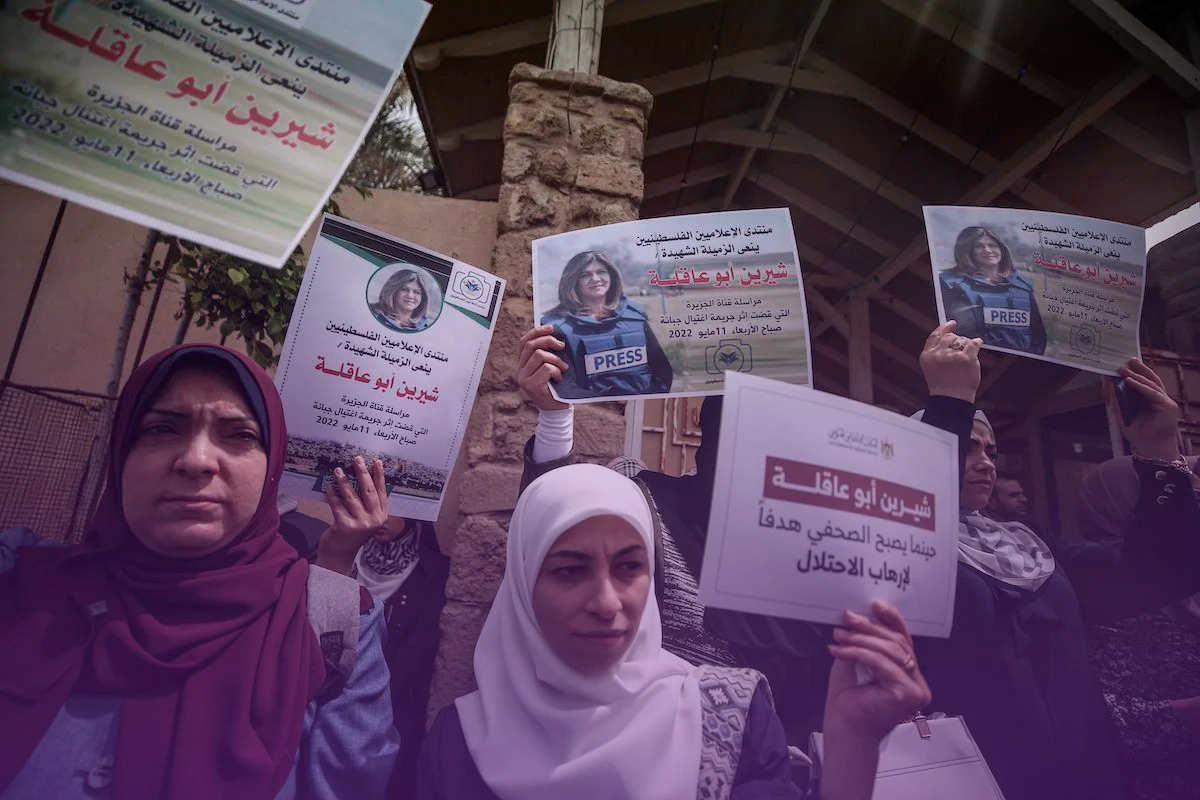 It is not possible to talk about journalism, misogyny, and violence without talking about the recent case of the Palestinian journalist Shireen Abu Akleh, killed by the Israeli army while she covered an armed raid on a Palestinian refugee camp in the West Bank. The Al Jazeera correspondent was wearing a vest and helmet marked “Press” when she was shot in the face while covering the raid against the Jenin refugee camp.

Juliana Medeiros, a journalist who worked as a correspondent covering the conflicts of the so-called “Arab Spring,” says that it is no coincidence or irony of fate that Shireen was targeted by the sniper. “They killed Shireen because she was a voice, a Palestinian woman who covered the atrocities perpetrated by Israel in the region. A woman doing that is very powerful, especially because of the heightened risk of conflict zones. That shot was meant to silence that voice. They could have shot any other journalist there. None would send such a clear message to journalists, especially Palestinian women who are so brave and do guerrilla journalism like few others in the world,” she argues.

Another case that really illustrates the danger experienced by women communicators is that of Daphne Caruana Galizia, a reporter who led the investigation on the Panama Papers about corruption in Malta, a member of the European Union. Daphne, who was dubbed the “one-woman WikiLeaks,” died in 2017 after a bomb detonated inside her car. She was killed at age 53 and had dedicated her life to investigative journalism in her country. One of her last revelations was the connections between the Maltese prime minister, Joseph Muscat, and two of his advisers with offshore companies and a passport purchase scheme. The journalist was receiving death threats to change her reporting and stop covering certain topics.

The case of Serena Shim is also emblematic. The US journalist was working for the Iranian network Press TV, doing stores on the Turkey-Syria border. Serena was threatened by Turkish intelligence, but continued to report and paid the price for her unflinching journalistic integrity. She died suddenly in a suspicious car accident in October 2014, in circumstances that remain obscure to this day. Two days before the “accident,” Serena had alerted her employers that she was being threatened and accused of espionage. She was writing about ISIS/DAESH terrorists who were crossing the border from Turkey to Syria in disguised trucks with labels of NGOs and the World Food Programme.

A survey by Reporters Without Borders (RSF) shows that, in 2021 and 2022, 124 women journalists were killed, taken hostage, or disappeared in the world. The list only includes cases connected with their journalistic work, so it does not include people who have been killed or arrested for other reasons or when the link with their work has not been established.

The Underworld of the Internet Supported by Anonymity

In addition to threats and retaliations they endure in person or which target their work environment, the internet has become an inhospitable place prone to attacks against women journalists and communicators. Social media allow direct and sometimes anonymous contact, where death threats are now common and where pictures of journalists’ family members or personal data are disclosed. The 2021 report “Ataques ao Jornalismo” [“Attacks on Journalism”], on a different survey by Reporters Without Borders and Brazil’s Institute of Technology and Society of Rio de Janeiro (ITS Rio), found half a million tweets with offensive hashtags targeting journalists and communicators in Brazil.

The details of this report show that the number of posts mentioning or offending women communicators was 13 times larger than those offending men, attacking not only their journalism, but also their personal lives.

Misogyny is a structuring aspect of these relations. Women who are willing to do critical journalism and do not bend in face of the impositions of those who are in power—mostly men—suffer the consequences of sexism and have their personal and professional reputation tarnished to force them out of journalism. Juliana Medeiros points out that war narratives are always hegemonic and, if you take a contrary stance on it, you immediately become a target. And if you are a woman, you are twice as much a target.

She recalls the case of Lizzie Phelan, a British journalist who covered for months the situation in Libya before the NATO bombing. Lizzie was left in a hotel where foreign correspondents were staying when the terrorists came in. She was the only woman journalist there and she was left behind by her colleagues (correspondents for other agencies) when a humanitarian rescue team came to take communicators out of Tripoli, the capital of the country. Lizzie was only rescued after she was able to hide and post videos on social media reporting gunshots and bombs in the surroundings.

After the episode, Lizzie continued to experience attacks, this time against her character. Memes disparaging her personally on journalism forums and accusations of her being involved with high-profile people in exchange for favors became common in her life. These things impacted her personal and professional life. A journalist who worked every day providing a counternarrative in conflict territories became reclusive for months after the attacks coming from her own peers.

She eventually got back to reporting from conflict zones and was even the first Western journalist to be on the ground reporting on the armed conflict in Syria, when DAESH terrorists raided and destroyed the ancient ruins of Palmyra. Lizzie was also on the ground during the Gaza bombings in Palestine, showing that women journalists—when receiving the same type of coverage and protection as men—can be reporting on the ground as effectively and efficiently. Cases of sexism experienced by Lizzie are not rare. “Women are treated like they are crazy, insane, like they don’t know what they are saying. Or stories are made up about them having slept with this or that. These things never happen with men, and we know why,” Juliana Medeiros points out.

Rape as a Weapon of War

When conflicts emerge between groups or countries, women’s bodies are considered a territory that can be occupied, an object to be conquered.

“The risk should be the same for everyone who is on the ground covering a conflict in a country, but at the end of the day women are always more exposed. Especially in wars, because unfortunately rape is a weapon of war since time immemorial,” Juliana says.

Lara Logan, a US journalist and correspondent for the CBS show 60 Minutes, was raped in Cairo after the regime of former Egyptian president Hosni Mubarak was overthrown. “In the middle of the crowd, she was taken away from her crew. She was surrounded, brutally sexually abused and beaten before being saved by a group of women and around 20 Egyptian soldiers,” the network reported in a statement.

Invisibility and Lack of Dignity

“There is also invisibility after death for women. The great laureate journalists who are remembered are always men,” Juliana says.

Shireen’s case was no different. The journalist was not even granted the right to a dignified celebration after her execution. Her funeral was attacked by the Israeli police and her coffin was even dropped to the ground. A similar thing happened with Serena Shim, mentioned earlier. Her stories were removed from YouTube after she died and the details about the accident that killed her are hard to find.

Fighting the effort to erase her existence, a group of family members, colleagues, and friends created an international award as a tribute to her, awarding personalities such as Julian Assange. “It is important that the world knows that a woman was brave to stand against the hegemonic narrative and show—despite the clear risks to her integrity—that there were other issues happening in that conflict zone and that powers (and media organizations) are always interested in preventing these stories from coming to light,” Juliana points out.

Things are not different in Brazil. Since the election of Jair Bolsonaro, in 2018, the press has been attacked and discredited by the president. In 2020, Bolsonaro alone was the perpetrator of 40.89 percent of the assaults recorded by the National Federation of Journalists (Federação Nacional dos Jornalistas—FENAJ). The FENAJ found cases of verbal abuse, direct threats against journalists, attacks to the federation, and more than 150 episodes of him discrediting the press.

According to the report “The Impact of Disinformation and Political Violence on the Internet Against Women Journalists and Communicators” by Gênero e Número, one of the most common types of violations are misogynistic attacks or sexual innuendos (19.4 percent), in which women journalists are directly assaulted as a way to intimidate and discredit them and damage their reputation. Threats against the personal and professional reputation and physical integrity of women journalists, as well as the inappropriate use of their images or pictures, are also recurrent types of crime, but to a lesser extent.

The Role of Communications Under Authoritarian Regimes

Laura points out that there were attempts to shift responsibility in the recent murder of Shireen. “This is what we see in several conflicts involving unreasonable forces against vulnerable populations. For example, recently the Palestinian journalist was killed by Israeli soldiers. The government of Israel tried to attribute responsibility for this absurd crime to the Palestinians who were simply trying to rescue her. That is, there is a complete shift of responsibilities and of the very narrative in the sense that the of having the word and the story told by the oppressor.”

Martha Raquel Rodrigues lives in Brazil. She is a journalist pursuing a master’s degree from the Latin America Integration Program of the University of São Paulo (USP). She is a member of the Free Journalists (Jornalistas Livres)network and a communicator for the Landless Workers’ Movement (Movimento dos Trabalhadores Rurais Sem Terra—MST).