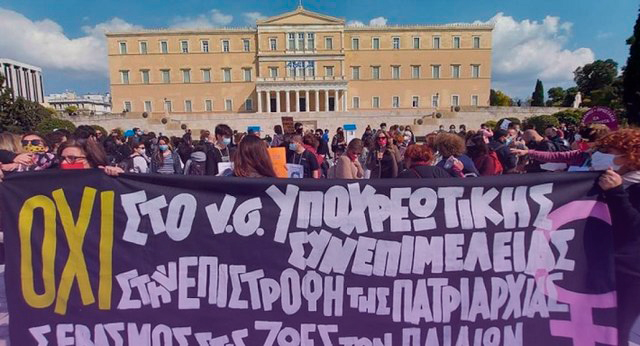 The feminist movement, at the forefront of popular resistance in Greece

What has happened in Greece over the last two years is worthy of attention: never before in the history of the country has the issue of women’s rights had so much attention in the press, been the subject of such passionate public debate and occupied the forefront of the political scene. It all started when the Mitsotakis government tried to align itself with the most reactionary and obscurantist neoliberal forces on the planet, launching a frontal assault on women’s human rights. Fortunately, this did not take into account the revival of the feminist movement, which took up the challenge – and this is how it went.

The case of the “unborn child”

Encouraged by the victory of the right wing “New Democracy” party in the 2019 parliamentary elections, the Holy Synod of the Greek Orthodox Church invented, on the first Sunday after Christmas, a day dedicated to the “unborn child”. They said this decision was taken in order to protect the life of the child before birth and solve the demographic problem of the Greek nation.

36 years after the legalization of abortion in Greece – thanks to a very progressive law, passed in 1986 after an assiduous struggle lasting nearly ten years by the feminist movement – the Greek Orthodox Church thus gave the signal for a frontal attack on this hard-won right.

A few days before New Year in 2020 and on the day dedicated to the “unborn child”, the front page of a sports magazine caused a tsunami of indignation on social media. On its cover was depicted a large hand, holding a ridiculously small fetus in its palm, while underneath it was written in bold capital letters, the sentence: “LET ME LIVE”.

Despite the reactions of social media, the Minister of Development – the notorious racist and former neo-fascist Adonis Georgiadis – was quick to congratulate the magazine, saying that Greece having twice as many abortions (300,000 per year, according to his exaggerated claims) as births would cause the country to lack nearly a million children, and would pose a problem for the survival of the Nation.

A few days later, giant posters appeared in the Athens metro with the same message and the same fetus. And authorship of this anti-abortion campaign was claimed by a long list of fundamentalist Orthodox Christian associations. But the retrograde and obscurantist Orthodox Church did not act alone; it enjoyed the support of many ministers and senior government officials. After another public outcry, the Ministry of Transport quickly ordered the removal of the posters. But these attacks on abortion rights were only the prelude to what would follow.

Influenced by regimes like Orban’s in Hungary, the Mitsotakis government took a first step to give itself a pro-natalist profile and decided to rename the “General Secretariat for Gender Equality” – an institution also born from the second wave feminist movement – as “Secretary General for Demographic and Family Policy and Gender Equality”.

The return of the father’s law

But other attacks would follow. The New Democracy government clearly showed this by adopting in May 2021 a law on joint parental authority which reformed key articles of the Civil Code in terms of family law. It was truly a crucial moment for women and children who are victims of domestic violence. This bill came into being after having been long demanded by a very chauvinist and aggressive lobby of neoliberal, violent and vulgar fathers. The latter joined forces with the N.D. government on the basis of their common interests and around a pro-family discourse.

Thus, the government revised what had been the quintessence of family law and is still very progressive today, achieved in 1983. This law was a real anti-patriarchal revolution because it replaced the right of the father – progenitor – (paternal power) by parental authority. Now, after the dissolution of marriage, unlike the 1983 law, the new law imposes compulsory joint parental custody, so the child is forced to spend 1/3 of their time with the parent with whom they don’t usually live, even if they don’t wish to do so. Even when the father is violent, the child’s desires are not taken into account.

To remove communication from an abusive parent, you need a final judgment. This can last for years or never happen, because going to court in Greece is difficult – it costs money and a lot of stress and women from single-parent families are vulnerable, poor and destitute, being in a situation of incredible distress, accentuated even more by the austerity policies imposed in the name of debt and the pandemic. All this means that an abusive father can harass, rape and dispose of the child as he pleases, but also use the law to blackmail, indict, perhaps even criminalize mothers who simply want to protect their children and who risk their safety and their lives.

The draft law was severely criticized by Greek lawyers for its legal weakness and the violation of human rights and the Istanbul Convention it entailed. It was also rejected by all women’s organizations and the feminist movement, which faced a hate campaign led by the unleashed and misogynistic fathers’ lobby, supported by almost every major media outlet in the country.

When the law was passed by the majority – against most of the opposition parties in the Greek Parliament – the fanatics of the fathers’ lobby celebrated on social media and made physical threats against the country’s judges and prosecutors to force them to apply the law in favor of fathers: for example, the “Equal Parental Rights”” group wrote: “we direct the heavy artillery against the JUDICIARY, we load, we start and we wait! Let those of our members who disclose what is happening in our group, inform the Union of Judges and Prosecutors that they are now in our sights.”

In short, these masculinist groups have become extremely dangerous: Their anti-feminism, their culture of virility, the reconstruction of a hegemonic masculinity constitute ideological gateways to the most extreme right and sooner or later they will move increasingly to violent action at the social and not merely familial level.

The eruption of Greek #MeToo and the awakening of consciousness

The picture is bleak, but in mid-January 2021, in the midst of the pandemic, more than three years after the emergence of the #Metoo movement in the United States, the Greek #MeToo burst onto the forefront of the country’s social and political scene. The Greek #Metoo was triggered by the revelations of Sofia Bekatorou,43, a two-time Olympic sailing medallist (gold and bronze), who publicly claimed to have been raped at the age of 21 by a senior official of the Greek Sailing Federation. Addressing all women who have been sexually assaulted, she sent the message: “Break the silence, speak!”

This year also, the emergence of the Greek #MeToo has helped to mature feminist consciousness in the face of the most atrocious form of gender violence, femicide. The murder of Eleni Topaloudi in November 2018 in Rhodes – a 21-year-old student, raped, tortured by two young men, thrown into the sea while still alive – helped introduce the term “femicide” into everyday language.

But it was also this year – especially this summer – that throughout the country, from Athens to Thessaloniki, from Crete to the Cyclades islands, there were successive murders of women by their partners. However, this time, the difference with the very recent past was eye-opening: the media talked about it rather extensively, tongues were loosened, political parties were abandoning their usual silence, and above all, women were taking to the streets, feminists in the lead, to shout their anger and call for solidarity!

The renewal of the feminist movement

Here is another example of the revival of feminism: Last June, an advertising spot asked women… to procreate, especially those who had “aged” and had been too preoccupied with their careers and thus neglected interest in their fertility. It was an advertisement for the “1st Panhellenic Fertility Conference” which was supported by the church, assisted reproduction companies, the “Secretary General of Population and Family Policy and Gender Equality”, the public broadcaster (ERT) and the President of the Hellenic Republic herself. But, after a new public outcry, President Katerina Sakellaropoulou was forced to withdraw her support for the Conference and almost all official participants did the same… the conference was cancelled. It was a total fiasco!

Eventually, the Mitsotakis government was able to pass its joint parental authority bill – narrowly – but even the pro-government media admitted that it was a Pyrrhic victory. Feminist resistance has sown trouble even within the Council of Ministers and caused dissension even in the parliamentary group of New Democracy. It was the first time since its formation in 2019 that the right-wing government has undergone a crisis and, by common admission, responsibility for this absolute novelty lay with the feminist movement.

The conclusion is not difficult: 2021 has seen the birth in Greece of a renewal of the feminist movement, young, radical but also unitary, which already occupies the forefront of popular struggles against the Holy Alliance of neoliberal reaction and nationalist and orthodox obscurantism. The event is significant, almost historic, in a conservative and disoriented Greek society, which is always seeking a left worthy of its name. What comes next promises to be exciting.

Sonia Mitralias was coordinator of the World March of Women in Greece (2000-2010) and is part of the Committee for the Abolition of Illegitimate Debts. This article was originally published on the International Viewpoint magazine.