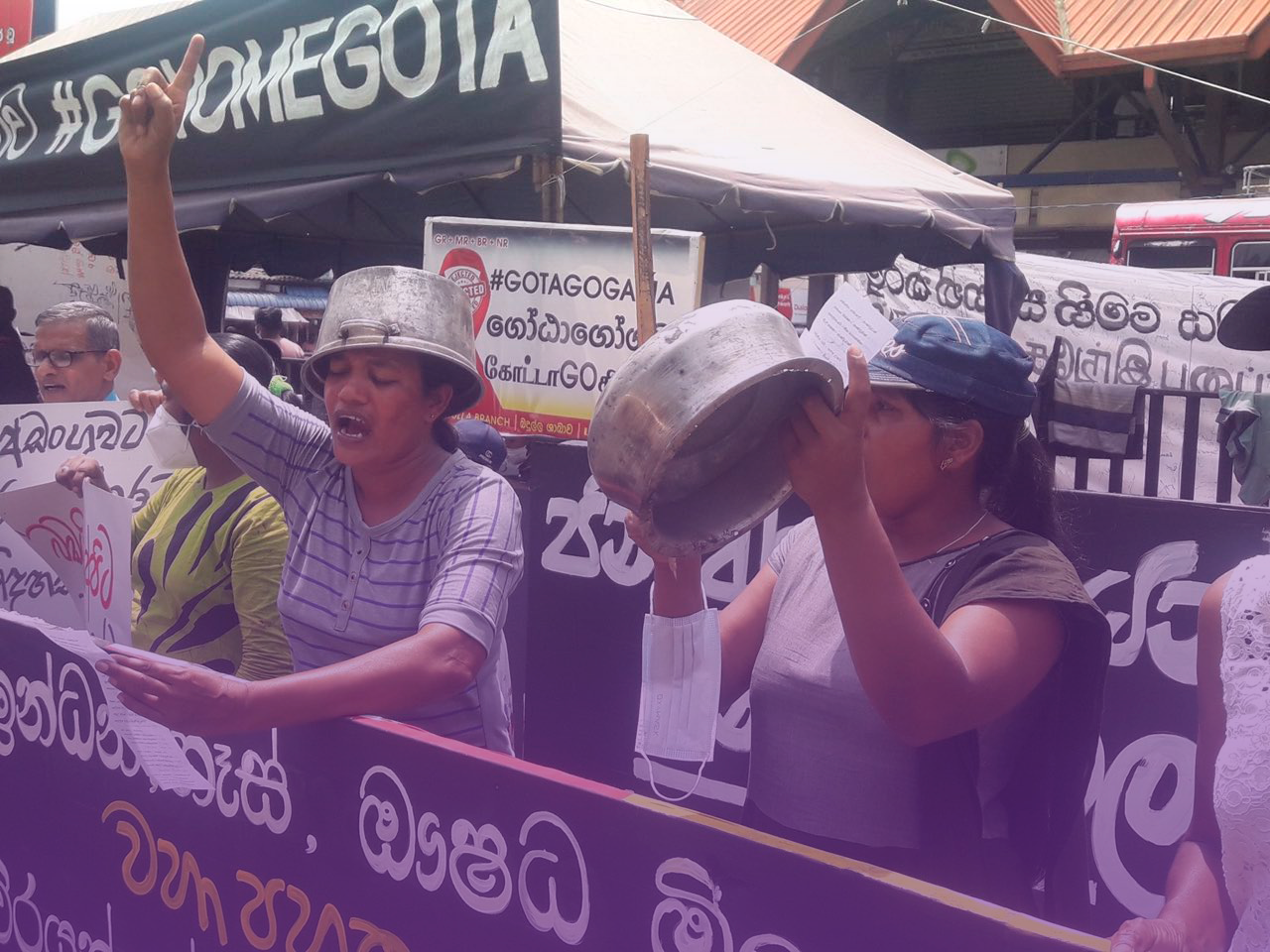 The Rajapaksa family is the main reason for all the human right violations in Sri Lanka during the past 40 years, specially during the war, until 2009 and thereafter, when many people disappeared, were abducted or killed. But because we were living 27 years of a separatist war with the Liberation Tigers of Tamil Eelam (LTTE), the majority of the people supported the brothers. The population considered them war heroes. Gotabaya Rajapaksa was the defense secretary during the war. So in the last election, in 2018, people voted for him for president. Until 2015, Mahinda Rajapaksa, elder brother of Gotabaya was the president.

In 2015, we had brought a change in the country, with the government of the United National Party, but that didn’t last long. The Rajapaksa family came back to power under the slogan ‘One Country One Law’, an anti-Muslim agenda connected with the wartimes. This agenda became even stronger after the Easter Attack[1], claimed by the Islamic State. At that time, the people really believed that an anti-Muslim government would prevent the country from a new civil war. Then they started to get more support from the Sinhala Buddhist, the majority of the   population. They are always investing in racist and religious extremist slogans to profit from their election.

Because of all these historical issues, they came to power, but they couldn’t manage the finances. Due to their mismanagement and authoritarian ruling  nature, in 2021, the government brought down foreign exchange reserves to pay internal debt of two billion U.S. dollars. They took the money because we had a high number of loans from China, for example, which is Sri Lanka’s fourth-biggest lender, behind international financial markets, the Asian Development Bank and Japan. The country has received billions of dollars of soft loans from China, but the island nation has been engulfed in a foreign exchange crisis which some analysts have said has pushed it to the verge of default.

In 2021, the government drew down foreign exchange reserves to honor debt payments of USD 2 billion. In 2022, January and June respectively, loans of USD 500 million and USD 1 billion are due. Sri Lanka will be required to repay an estimated USD 7.3 billion in domestic and foreign loans. However, as of November, available foreign currency reserves were just USD 1.6 billion.

Due to this, the government can’t buy petrol, fertilizers and necessary food items, which is becoming a huge issue in the country and affecting especially the grassroots citizens. The problem is giant within the fuel items. The lack of it is now causing power cuts in the country. The power-machines require petrol to operate. Without energy, factories, offices and companies don’t function. Factories in the garment sector and tea export sector, the backbone of foreign revenue, can’t produce to meet the demand of the buyers and the market. Because women are the main labor force in these sectors, they are the more affected, losing their jobs and sources of income.

The plantations and farmers are not working properly since 2021 because of the lack of fertilizers. There are no proper harvests this year, affecting the farmers that have now no incomes, and the country that has no food. The lack of fuel is putting the population on the streets in kilometers long lines to get gasoline or cooking gas. Mothers are going to the roads in the search of gas and food for their children.

People are dying in the hospital without medication or oxygen. The World Bank estimated that around 500,000 people have fallen below the poverty line since Covid-19 pandemic. That’s becoming worse now. The prices of common food items have rose more than 15%. Jobs have been lost and vital foreign revenue from tourism, which usually contribute with more than 10% of the GDP, has been substantially decreased. More than 200,000 people lost their livelihood in the travel sector. This is all a result of the bad governance of the Rajapaksa family. We have been talking about human rights, good governance and constitutional crisis for the past decades, and people portrayed us as betrayers of the nation.

At first the loans from China were justified with the promise for the population that Colombo, capital of Sri Lanka, would become a new Singapore, a developed port city. Then, people started to realize they have been deceived and started to protest. These protests were so strong and so much pressure were put that the president imposed an interim government and asked the prime minister, his brother Mahinda Rajapaksa, to resign. Before that, other ministers had already resigned. The protesters are asking for the president to resign as well. Our demand is for the whole family to leave politics.

The root cause of all of this problem is that the Constitution gives excessive power to the president, the judiciary and the legislation body. We need to amend the Constitution to be a People’s Constitution, not a constitution to protect the rulers. The rulers shouldn’t be able to do anything they want with the funds and economy of a country without people being able to question them.

Before, anyone who questioned or criticized them were abducted or killed, or they would fabricate some history and put you in jail. Now we are demanding for a new government. The women are fighting against this situation, but their priority is the basic needs. Food, water and gas are the bases for life, and they’re not easily available now. Women are 80% of the workers in the garment sector and in farming, the two more affected areas. And with them losing jobs, the crisis only increases. Also, because of the high prices, women from the informal sector don’t have more products to sell or people to buy the products from them.

There are mainly three ethnicities in Sri Lanka: Tamils, Muslims, and Sinhalese. Politically, the  party politics have divided women ethnic-wise. Apart from that, we have been divided regionally. Muslin women will support Muslim political parties, and so go on. Some of us are working together, but the majority of women are separated in the struggles. The reason for it is the same: the last 40 years of the separatist conflict. This grudge and division is unconsciously registered in their minds. These women are equally affected by this economical and constitutional crises, so they must come together.

Another aspect of it is the low percentage of women in politics in South Asia. We are not more than 5.8% in the Parliament. At local governments, we have brought a 25% quota in 2018. When it comes to politics, all the political parties, regardless of ethnicity, religion or region, don’t give priority to women or don’t recognize women participation in decision-making tables. But in these protests we can see many young women fighting in the front. The struggle is to open spaces for these women to participate in politics, because the problems and the violence that we face today were all promoted by male rulers.

We got voting rights for women in 1931 in Sri Lanka. More than 90 years have passed, but in the Parliament we only have 13 women from 225 seats. If we want to have a country with equality and dignity for women, ethnic and religious minorities, if we want for all the citizens to be living equally by enjoying equal opportunities and equal participation, we need a Constitution which respect human rights for all. That allows the people to have their rights guarantees and have access to social justice.

[1] On Easter Day, in 2019, eight bombs were blasted ripped through multiple cities and locations including three Churches and high-end hotels. More than 250 people died and around 500 were injured that day.

Nalini Rathnarajah is a human rights defender, a feminist and political activist from Sri Lanka, currently living in Colombo, capital of the country.