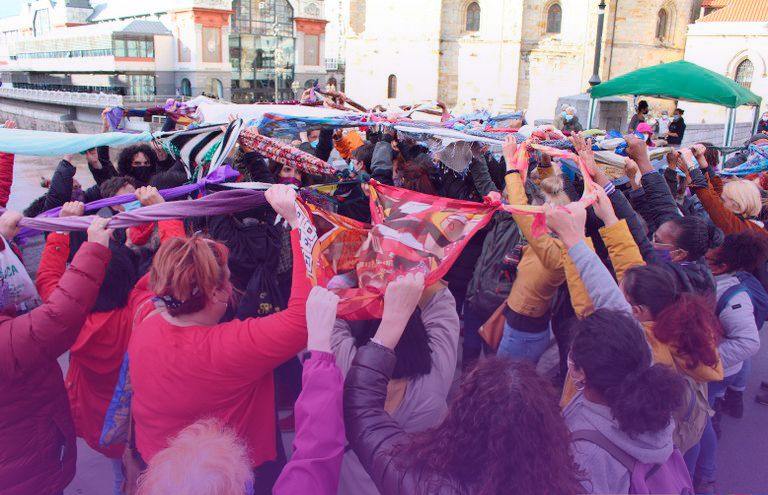 Rebelling Against Borders, Exploitation, and Violence in Europe

Luciana Alfaro Lavado, of the International Committee of the World March of Women, writes on the movement’s perspectives for the region

The context of disorder and impoverishment of living conditions due to the pandemic has especially affected feminized labor sectors, such as the services and care industries, in which not only working conditions have become more precarious, but also thousands of women have lost their jobs.

In Europe, sexist violence continues to kill women, and attacks against LGBTQIA+ people are common. Last year, homophobic and transphobic killings and assaults have been sometimes encouraged by some governments. Last June in Turkey, on Pride Day, the Recep Tayyip Erdoğan government did not allow the parade to happen and ordered the police to shoot teargas against demonstrators.

Migrants who have been forced to leave their home countries are increasingly vulnerable as they face border and immigration policies. Many even lose their lives while migrating. In the Mediterranean Sea, 36,000 people have died in the past 20 years trying to get to Europe.

Migration policies victimize migrants by perpetrating different forms of violence—by criminalizing them, exploiting their labor, and discriminating against them as they try to access rights such as housing. Migrants are employed in industries natives avoid to work in, such as agriculture and care work. These industries are essential for the sustainability of life, but they are taken for granted and remain unappreciated.

Migrant workers are struggling for decent working conditions. In the Spanish state, women rural workers are known for their struggle, such as Huelva’s Women Day Laborers [Jornaleras de Huelva], who are suffering and denouncing labor abuse, and the struggle waged by associations of domestic and care workers, who are fighting to have care work acknowledged and to end domestic work that requires workers to sleep in.

The situation in Europe is worrisome not only because many counties are run by the right. Critical consciousness is harder to achieve as we face the power of the populist, conservative, and fundamentalist rhetoric that turns into racist, homophobic, and sexist behavior and legitimizes the violence of institutions.

The World March of Women’s Agenda

During the latest European meeting of the World March of Women, we discussed how strengthening anti-capitalism within the feminist movement is necessary. We pointed out that our participation is not as strong and committed when we denounce patriarchy as it is when we denounce capitalism. This is why we must immerse ourselves in the idea that capitalism, heteropatriarchy, and racism go hand in hand and should be tackled as a whole.

We also consider that it is necessary to continue to denounce the murderous migration policies and the new European Pact on Migration and Asylum. For this reason, this year, the European chapter of the WMW is carrying out a Feminist Campaign for Petitioning Asylum for women, girls, and LGBTQIA+ people. This action is conducted concurrently with a radical work to put an end to borders.

The conversation that emerged during the meeting, about how the WMW needs to reflect on the European Union as a structure, was very important. We want to build a political vision on what our collective project is for Europe as an alternative to what the European Union is today. Some of our national coordinating boards came to the conclusion that the EU is not the Europe we want as a movement.

As a new year begins, the feminist movement is tasked with continuing to build feminism as a struggle that is not only against the heteropatriarchal system, but also working hard to have our feminism continuously rebelling against all forms of injustice created by this system.

The World March of Women Europe representatives in the International Committee are Marianna Fernandes, Marcela de la Peña, and me—three migrants. In my case, and I believe my sisters’ case as well, the feminism we fight for must rebel against all forms of violence Europe inflicts through its border and migration policies, and rebel against corporate power. Transnational companies based in Europe are supported by European states and operate in our home territories, plundering resources, polluting nature, exploiting local populations.

We must continue to say the name of the feminism the World March of Women stands up for. To reiterate that we are an anti-capitalist, anti-racist, and anti-colonial movement, and that we shall continue to work hard as such. One of the strategies that we consider necessary in our regional organization is to create feminist political education schools.

We also want to situate our key dates on the broader feminist calendar, such as April 24, to mobilize feminist solidarity against transnational corporations and the deadly textile, border, food, pharmaceutical, and extractivist industries.

The reflections and mobilization produced during the World March of Women’s international actions every five years are important to our movement. But from five to five years, this strength fades. We know it is not easy to keep it going, especially now amid the pandemic, when possibilities for meeting each other are limited.

Organizing regionally is a challenge on many different levels, including the language level. The conversation between national coordinating bodies requires the support of our interpreter sisters, and coordinating this support is also an operational challenge.

The internationalism of the WMW gives us the opportunity to connect struggles both on the ground and regarding theme aspects. This strengthens us as a movement—on the one hand, we can get to know and organize the conversation about resistances that are being waged and weaved in different regions against hegemonic power; on the other, it makes it easier to coordinate struggles, creating and strengthening alliances with social movements that work on the same horizons of struggle.

Luciana Alfaro Lavado lives in the Basque Country (Euskal Herria) and is a member of the International Committee of the World March of Women Europe.