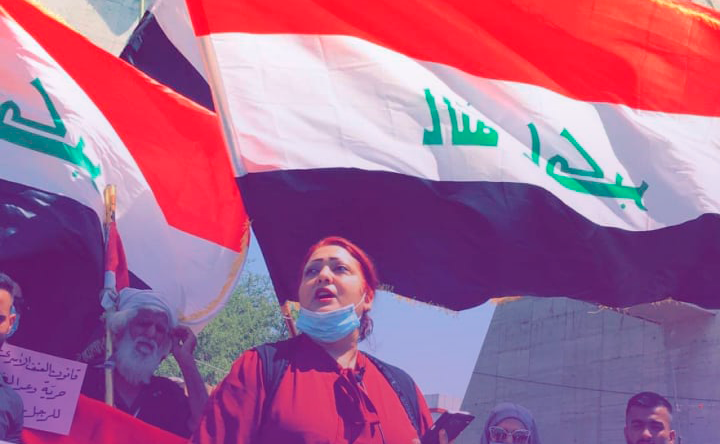 Since the beginning of the twentieth century and until now, the Arab world has been exposed to many wars, armed conflicts, and direct and indirect colonialism. These wars have left behind the worst kinds of psychological, moral, and human devastation in all of our countries and have to be dealt with by all classes of society, especially by women. Women have to fit into two roles in the home: raise children and take care of them, and cope with the absence of the father, who is on the battlefields, held in captivity, in martyrdom, or arrested. Women work outside the home and face the problems of gender discrimination.

Women also face the fate of defending their homeland. We see them standing side by side with men on the battlefields and wrestling fiercely to protect their homeland, including those being subjected to arrest, imprisonment, torture, and being deprived of their most basic human rights. The struggles of Palestinian women are emblematic of this. They have been suffering under the Zionist occupation and being dispossessed from their lands for more than seventy years. For generations, the women of Palestine have sacrificed and offered their most precious possessions in order to obtain independence and recover their lands usurped by the Zionists. They are treated by the occupation with the most horrific methods of torture inside prisons upon arrest, and even during the course of their daily lives. Discrimination, separation, marginalization, and inhumane treatment are perpetrated against them, and they are still struggling and making double efforts to live a just life.

The same scenario happens with women from Lebanon, Yemen, Libya, Syria, and Iraq. Women from these countries suffer under armed conflicts between terrorist elements and extremist Islamic groups, which makes them vulnerable to migration and displacement to their countries’ border areas. They flee in order to be protected against murder, child marriage, rape, and the imposition of extremist religious norms by sheiks of religious parties, government control, and laws.

Decades of Military Conflict in Iraq

The first reason for war in our region is the battle for access to explore territories, which have always been rich in natural resources, such as oil. The policies in place to access and control these resources have been the same for decades, aiming to stop the liberation movements and processes of women and the peoples of the region.

Since the independence of the countries in the Arab world and in Iraq, especially after 1977, the United States started to implement a political strategy of indirect interference to occupy the country and access our resources. The economic manipulation aspect of this policy stands out. Since then, there have been conflicts between countries and new conflicts involving extremist groups: first the Taliban, then the Islamic State. Another dimension of this indirect interference is the pervasiveness of drugs, causing new problems, especially among the youth.

The Iran-Iraq War (1980–1988) has left many dead and impacted women’s lives. It is estimated that nearly one fourth (25 percent) of the Iraqi people died in that war. Women are still dealing with this toll, as many became widows and had to rebuild the lives of their families.

During the Gulf War (1990–1991), the United States led a 33-country coalition against Iraq. In two years, the country’s entire infrastructure was destroyed: factories, schools, streets. And between 2003 and 2011, the direct invasion and occupation—again spearheaded by the United States—devastated the country in the name of “the liberation of the Iraqi people.”

Against this intertwined reality, we note many challenges from the side of those who struggle for peace and justice. Democratic and secular forces fail to have a clear strategy to counter these conflictive scenarios. They have a weak role and low influence in the events and conflicts that occur in our countries and in the relationship with society, especially with the working class and marginalized groups. There is a lack of compatibility and harmony in the strategies of the Arabic democratic forces and the forces of the Kurdistan Alliance, in addition to differences in views on many issues, which hinder the access to a common vision and effective cooperation among them. There is an exacerbation of sectarian political behavior, which in turn leads to more political conflicts.

In Iraq, one challenge is the actual absence of an effective, influential, and daily role for female intellectuals and the role of politicians in the absence and isolation of this enlightened group from other groups of society, which leads to the emergence of new problems.

In this scenario, in addition to left-wing and nationalist parties and organizations, new organizations have emerged, especially after the Arab Spring. Joined by young people and arguing for feminism, they constitute NGOs and establish project-driven dynamics. They raise foreign funds, but do not engage in a grassroots organization process. For example, on the outskirts, where 70 percent of women are illiterate, they set up projects with other priorities, focused on entrepreneurship, with values and data that are not transparent. They do not intend to solve problems from their root causes.

Women also take part in political parties and the parliament, but it is a weak participation in the overall political process. A large number of women working in the political field and in parliament are linked to very conservative Islamic political forces and it is difficult for them to express women’s interests in the era in which we live, as they represent a bygone era that has no place today, while also disregarding current issues such as ignorance, poverty, and unemployment.

Their participation, therefore, is strongly subjected to men and their work is opposed to left-wing women. For example, communist women work to raise awareness and organize women from a left-wing perspective, striving to organize marches and discussions, but women from other forces oppose that.

We do not have care and support centers for women who are victims of violence. Everything that had advanced in the 1960s and 1970s was lost. Even with women’s participation in parliament, the law remains very outdated and contrary to women. One example is that, to this day, the law establishes that a solution for rape cases is to have the rapist marry the victim.

In the midst of all the problems presented, we strive, as organizations and activists for women’s rights and civil society, to struggle daily and continue to find solutions and raise the intellectual level of our women through workshops, seminars, rallies, and marches to obtain the rights stolen in all aspects of life—politically, economically, and socially.

In 2020, we started a youth movement—with men and women—dedicated to raising awareness of women’s rights and gender equality. We are approximately 120 people, working women and students. It is not easy to organize a permanent group of this kind. In Iraq, whoever denounces the situation of subjugation and inequality that women face can be persecuted and threatened with violence. This is a huge hindrance.

We conduct several activities: political education workshops, online meetings, and lectures. Not only that, we also produce and distribute materials on women’s rights using colloquial language, with the slang words we usually use.

Handing out these materials is the way we use to talk to people and protect women from forms of violence such as child marriage and honor crimes, which have been increasing in Iraq.

Honor crimes are not only about infidelity, but there may be several reasons that give the men of the family—husbands, cousins, brothers—the right to assault or even kill a woman. It is clear that, after 2003, we have been facing an offensive with increasing ignorance and unawareness among men. This is why we posit that education is fundamental, and it is part of our everyday resistance as women.

In our struggle, we have a mountain to climb toward equality. As we go up one step, we fall three. We must remain resistant and organized. This is why we believe in building the World March of Women in the region.

Teeba Saad is a member of the World March of Women Iraq and the Iraqi Feminist Uprising Movement.

Edited by Bianca Pessoa and Tica Moreno
Translated by Yara Osmani (excerpts in Arabic to Portuguese) and Aline Scátola (excerpts in Portuguese to English)
Original language: Arabic and English

Women on TV: Strategies to Broadcast Feminism in Ghana