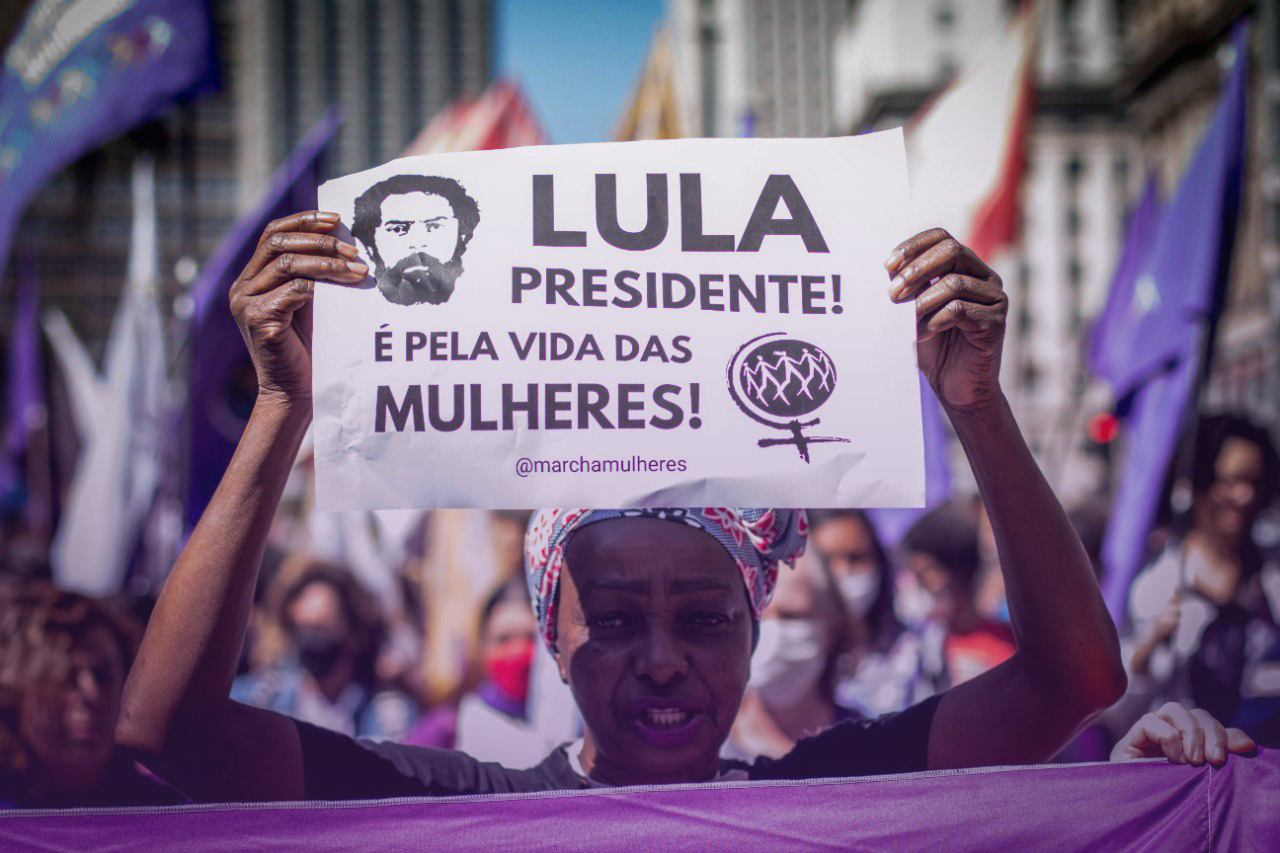 Brazilian Elections: The Battle for a Democratic and Grassroots Feminist Project

October 2nd, 2022 will be a decisive date to defeat Jair Bolsonaro and put an end to the far-right government that has been attacking Brazil since 2019. Electing Luiz Inácio Lula da Silva as president this year is crucial to resume Brazil’s relationship with Latin America while helping to weaken the far-right relationships that have become stronger between Brazil and the United States. If Lula is elected, Brazil will join Mexico, Argentina, Bolivia, Peru, Honduras, Chile, and Colombia in the struggle for a strong and democratic Latin America.

While Lula’s victory is important to the region, these elections are decisive for women, LGBTQIA+ people, Black people, and the working class as a whole in rural and urban areas. The World March of Women militants from across Brazil have been building the struggle for this win in a collective and organized way, because we want to radically change our country.

In 2018, we denounced how catastrophic it would be to have the far right, represented by Jair Bolsonaro, holding the presidential office in the country. And since then, women continue to mobilize and organize. We held street demonstrations in 2019, in 2020 in the middle of the pandemic, and we remained mobilized on the streets in 2021, also holding several solidarity demonstrations. In 2022, several rallies have been organized by women, to denounce racism, sexism, homophobia, and the political violence women representatives have been facing more intensely in Brazil since 2018.

This year, our greatest response will be at the ballot box, by electing Lula as president as well as voting for representatives who contribute to the defense of the working class and a democratic and grassroots feminist project for the country.

We, as women, have been showing our collective power—from neighborhoods, communities, farms, through acts of solidarity and denunciation out on the streets—that we are capable of building a democratic and grassroots feminist project for the country. This project must be, therefore, grounded in tandem with social movements and the entire working class. This project must have the ability to undo the dismantling that has hit the country since 2016, since the coup against president Dilma Rousseff. Therefore, to change the country, it will be necessary to build this project with women’s agendas and struggles. We present here some of these key topics to organize the pillars of this project:

Life Above Profit, Sustainability of Life on Center Stage

This is a pillar that battles for the allocation of investments in our country and for who is seen as a generator of wealth. Feminist economy is key to guide the economy, based on relationships grounded in respect, equality, and reciprocity. For this pillar, it is important to take actions that appreciate and acknowledge women’s labor, that care for the commons, and promote agroecology and food sovereignty.

Feminist economy is what ensures that the sustainability of life will be on center stage. In this sense, this project needs to promote the connection with other forms of organization for the economy, countering profit-making and organizing experiences of agroecology and solidarity economy. This is necessary because, in order to ensure the sustainability of life, we also need to reorganize reproductive and care work, which is most often undertaken by women.

Women work nearly 24/7 caring for other people in and outside their households. Feminist economy has expanded the views on this dichotomy between productive vs. reproductive work. Therefore, in this project to rebuild Brazil, it is necessary to build integrated public policies that render domestic and care work visible and appreciate it, so as to expand the responsibility of the state for care and reproduction. These policies include education—whether day care centers or full-time schools—, one-day hospitals [created primarily to provide health care and procedures that require no more than 12 hours], low-income restaurants offering food produced by family farmers and peasants, among other policies.

After Brazil was removed from the hunger map in 2014, hunger is now once again ravaging Brazil in 2022. According to recent UN reports, the number of Brazilians facing food insecurity is as high as 61.3 million. This serious problem is a consequence of the dismantling of social policies and peasant and family farming support policies. It is also a consequence of families’ loss of income, of increasing food prices, and of the support to agribusiness. To remove Brazil once again from the hunger map, this project that aims to rebuild the country must have agrarian reform and agroecology as pillars to build the peoples’ food sovereignty.

This is about ensuring the right to eat, but also the right to produce and have food on the table that is free from GMOs and chemicals. To secure that, we must resume and expand programs that foster agroecology and peasant and family farming, including credit policies, technical assistance, and access to institutional markets. Supporting this project includes appreciating the peoples and respecting different territories and biodiversity, countering greenwashed transnationals.

For Free Sexuality, Autonomy for Our Bodies, and Life Free from Violence and Racism

Violence against women has significantly increased under the genocidal Bolsonaro administration. In this sense, another fundamental pillar to bring the country back is to strengthen policies to fight violence against women, against our bodies and territories—especially against Black women. We need policies that fight the racism that kills and incarcerates Black people in our country and criminalizes our struggles and those who live on urban outskirts. It is crucial to have a policy that stops the assassination of Indigenous people and peasant leaders and the encroachment and disappearance of their territories.

The violence against lesbians, bisexual people, travestis and trans people has always marked the past four years in Brazil. So we demand a new project that can strongly build policies to fight LGBTQIA-phobia and promote practical actions toward equality and diversity. Policies that discourage gun use and curb the organization of rural and urban militias in the country.

Hypocrisy has cost many women and even children their lives, as they have been stopped from terminating an unwanted pregnancy. It has also affected women and girls who have been victims of violence. In this sense, Black women have suffered the most and and are among those who are most often denied the right to legal abortion. Therefore, this new project needs to include policies to care for women and girls, moving them away from the underground route of abortion. This new project for Brazil cannot criminalize abortion—it should be a right.

Building This Project From the Base

This new project is already being built, and this is happening from our collective organization on the streets, networks, in forests, and farms. We are building and we want to continue to build this project from our struggles and our experiences of resistance and solidarity out on the streets and in our territories. These elements are fundamental to make sure this democratic and grassroots feminist project is effectively implemented. It includes, therefore, continuing and empowering grassroots committees, which have influenced the agenda of the elections even before the campaign started.

Grassroots committees as well as the conversations in election campaigns are fertile ground to help build grassroots awareness. In this election, women are 33.27 percent of the candidates, the highest number recorded in the past three presidential elections. Also relevant was the increasing number of Black women candidates. This increasing number of women in politics also exposes the cases of political violence against women in the country, as Brazil is one of the countries with the largest number of women representatives who have experienced violence while in office. Not to mention the cases that happen during the campaigns, including threats and having their right to funding denied for their political campaigns.

The World March of Women has several candidates running for several states across Brazil, which has contributed to qualify campaign activities beyond planning and asking for votes. These candidates have turned their campaigns into bona fide organizing and militant education actions that go beyond the context of the elections. Our meetings are spaces to discuss writings and videos and organize conversations about feminism, racism, LGBTQIA-phobia, social movements, and the necessary elements to build a society that includes all of us women with our dreams and our diversity.

Therefore, amid the election period and as the operation of Grassroots Committees becomes stronger, grassroots organizing increases as well as the conversation regarding class awareness and the need for a strong and organized feminist movement. And to us, militants, there is an ever-stronger need to strengthen ourselves as movements, as we need to increase our self-organizing ability. This will be crucial and much more necessary to tackle the consequences of the genocidal Bolsonaro administration. Moreover, we must strengthen our ability to propose a feminist project that is capable of impacting our country’s entire working class, with its diversities and specific characteristics, whether for rural or Indigenous people, residents of the outskirts, Black people, lesbians, or people with disabilities.

Edited by Bianca Pessoa
Translated from Portuguese by Aline Scátola