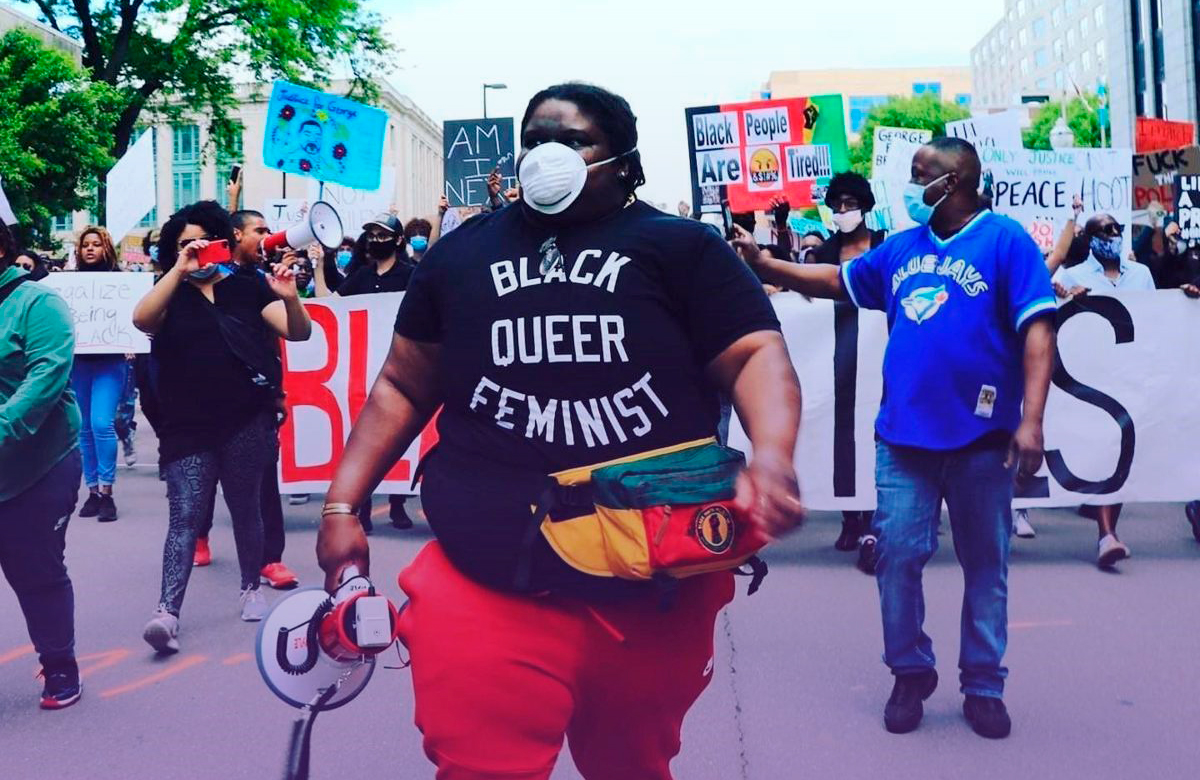 Read and hear M. Adams’ article about the about Black transfeminisms confrontating the colonialist system of opressions

We all need to be leaning into our transfeminisms as a necessary part of anticolonial struggle. There are two important points around the contributions of transgender, non-conforming, agender and non-binary feminisms, in particular black feminisms, for how we should be thinking about their relationship to anticolonial struggles. One is to confront violences and limits experienced by non conforming gender people. The other is to change what has been historically imposed on us by the racist and patriarchal system of oppression.

Some of the things that I’m going to raise are not necessarily unique to trans people. What is true is that trans, gender non-conforming, intersex people experience them with a particular concentration of violence. But these issues are not unique to us, which is why they’re squarely situated inside of feminisms. Bodily autonomy and reproductive justice control are not only impacting trans people, but instead it impacts us all in varying degrees.

A trans anticolonial struggle is an anticapitalist struggle for bodily autonomy, reproductive control and, ultimately, this is a struggle about what is recreated and reproduced inside of society. This idea is builded on social reproduction theory, which is a concept developed through marxist feminism. The idea behind social reproductive theory is that society does not just randomly, or without effort, reproduce itself.

What organizes our lives?

People are born in birth, but life is actually happening through some people’s labor. The birthing of people, the making, raising, socializing them into a set of norms, providing food, care, clothing, shelter, water, and everything else it takes to raise people and produce another generation of life are done by somebody. As feminists, we know that these labor responsibilities fall disproportionately on women and girls.

In transfeminisms we explore about who that falls on and we complicate why that dynamic is set all together. Your text hereTransfeminisms offer us as a way to even question how we understand who and what is a woman, a man and who and what and how then do these reproductive relations happen. We, trans people, experience violence inside of our families and our homes when we breach that social relationship.

For Black transgender people, to exist is to resist

I was a person who was raised to be a woman and girl, so very particular things were forced onto me. Very particular expectations were put onto my body in terms of who I was supposed to be involved with romantically, my role inside of the family, what was the care work I was expected or supposed to be doing and how I have to continue that as part of growing up and becoming the next generation of the family.

Many of us who are trans or gender-nonconforming breach those expectations and social contracts. We experience an extreme form of violence placed on to us from a very young age. Folks talk about being around two or three years old and not fitting neatly into that box. Then, violence happening. Kids are whooped or denied particular things, they are mistreated or said terrible things. All of that is called “corrective” to having us fit within capitalists’ constructions of gender.

The function of our gender is to carry out the making, rearing and creation of another generation of humans who would then become laborers or workers. Transfeminisms directly counter this function. Your text hereOur genders need to be liberated. Anticolonial gender means that the function of your gender is not solely to be reproductive. Our expressions and representations of ourselves and the functions of our bodies are not solely for reproductive capacity.

Whatever we are – woman, man, agendered or something else -, it should not be solely to serve the production of families and of workers to fit inside of a capitalist mod. I’m offering that transfeminisms are anticapitalist and challenge the function of colonized groups being just bodies and labor used to keep the colonial society working and functioning.

Violence happens in many different ways. It happens inside of the family unit when we teach children to have and take on particular gender formations and reproduce it. It also happens inside the medical society. Here in the United States, some of my comrades who are intersex – people who are born with bodies that the medical society doesn’t see as either female or male because they have different genitalia or chromosomes – have been operated when they was children to “fit” in a gender.

A person gives birth to this child, the doctor looks at this child’s body and says that this child needs an operation. Many of our intersex comrades are fighting and struggling for bodily autonomy. They just recently won an important victory in Chicago against a hospital focused on doing those really invasive, hurtful and non-essential procedures. With their struggle, that hospital will need to stop these activities. Even in supposedly advanced societies like the United States, we still experience this really extreme and concentrated forms of violence.

Gender construction is a history of power

Transfeminism really forces us to become non-essential. The way we understand gender is situated inside of a power analysis. Patriarchy is a system of oppressive power. It orders the world and gives us assignments for how we participate inside it through our genders. Transfeminisms seeks to destroy and abolish gender as a social category. That categorisation, inside of the capitalist patriarchal white supremacist system is a violence. Particularly inside of Black communities, gender formation on itself is a violent process.

The transatlantic slave trade has been ungendering us, the Black people. We were not even seen as human beings. In some ways, that gendering processes, in particular constructs of men and women, are constructs for human beings. That there is a different type of gendering that happens to objects, animals and the Earth – and this is what we experienced, the non-human categorization. All of us experience the process of ungendering. One example are the terrible police murders that happened across all Black genders. It doesn’t matter what your gender is, you will be seen as non-human and the state has the right and the ability to murder you, no matter who you are.

The second thing that happens to us is extreme misgendering. Sometimes, people continue to refer to a person who is transgender, nonbinary, or gender nonconforming using terms related to how they identified before transition. Black genders are seen as deviant, not fitting the white cis capitalist constructions of men/woman or masculine/feminine. In this way, Black transfeminisms offers us an analysis of how Black genders are all transgressing, or unstable according to those categories. An example of this are the ways Black women are described as brute when they are workers who don’t fit white constructs of femininity, lending us to gender abolition.

Because of our blackness, there are exotified and animalistic characteristics assigned to our gender. We are seeing as all the time sexual, and, therefore, people who are deserving of rape and sexual violence, people who really can be victims of that kind of violence.

There’s the hypergendering aspect, which refers to the ways in which Black genders are seen as extreme, exaggerated, or mysterious. We see evidence of this in some of the descriptions of Black people in police reports where Black men are described as “wolverine”, and appear some language like “hypermasculine” or “supermasculine”. Black trans women are denied emergency healthcare by EMT’s, who stop care when not being able to “determine” a person’s gender.  Our genders and bodies are held captive to white norms.

Some core feminist aspects is to be anticapitalist and directly confront and disassemble the relationship between gender production and capitalism. And another aspect is to question the arrangement of society by gender to undo the categorization of power through genders. This is a direct disruption in uprooting a patriarchal and anti blackness system all together.

M. Adams is a queer Black person, co-executive director of Freedom Inc. and activist of Take Back the Land Movement on United States. This text is an edited transcription of Adams’ intervention on the Berta Cáceres International Feminist Organizing School at April 2021.