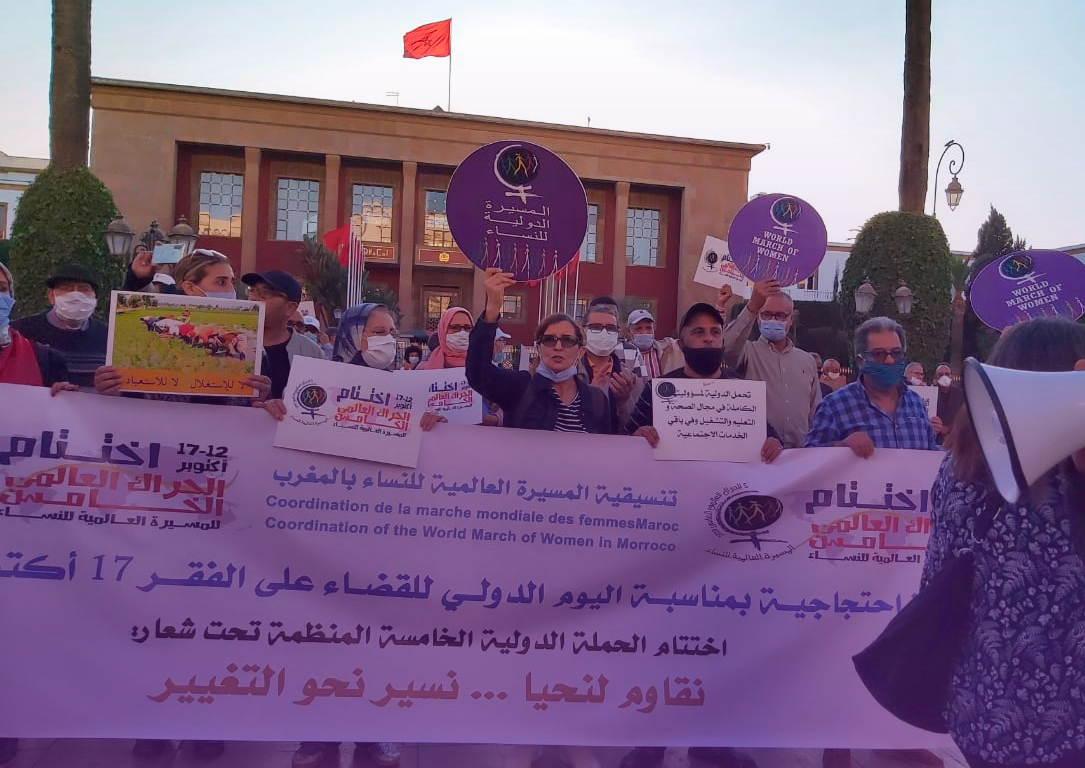 Amid the Pandemic, Women in Morocco Face marginalization and lead struggles

The World March of Women Coordinating Board in Morocco has been continuously supporting women’s struggles against the policies of impoverishment and humiliation that affect them.

By the World March of Women

Since the enactment of the health emergency laws due to the pandemic in March 2020, women’s situation in Morocco has deteriorated. Women have suffered more severally the consequences of the overwhelming economic crisis that emerged—the measures adopted to fight the pandemic have worsened the fragility and poverty conditions to which they were already subject.

The health crisis has exposed the terrible repercussions of a national economy that fails to address the needs of its population. It has also revealed the brutality of the neoliberal policies imposed by the leaders of the country since the beginning of the 1980s, which has caused the dismantling of the public sector, the deterioration of social services, a sharp increase in debt, the concentration of wealth in the hands of a very small group of families who dominate the economy and control the country, the escalation of anticompetitive practices that favor the wealthy and powerful,[1] and the intensification of corruption in the economic and political areas, among others.

Neoliberal policies have intensified women’s vulnerabilities, increasing their poverty, perpetuating the scorn against them, worsening the several causes of violence they suffer, and depriving them from the most basic economic and social rights, such as education, health, decent housing, decent work, and social protection. These policies have also deprived women from political and civil rights, such as participation in decision-making positions, protection against violence, the right to equality within the family, preservation of dignity, and the right to desired motherhood.

In rural areas, we face the lack of social protection for women, the propagation of the drinking water crisis, the scarcity of food, and the hideous exploitation of agricultural workers in the food industry. These workers are more vulnerable to infections due to the absolute absence of means of prevention and awareness among them, and due to the imposition of work during the quarantine to guarantee supply of basic agricultural products to the cities.

During the pandemic, just as it has happened in many regions around the world, violence against women has increased, particularly in urban areas. Many women lost their jobs because most of them work in the informal sector, which has been strongly affected by the economic crisis resulting from the poor management of the pandemic by the state. On the other hand, household activities, which are unregulated and not paid, have increased as a consequence of the interruption of most social services and have been ultimately shouldered by women.

In view of such rough life conditions, and despite the power of the mentalities that marginalize those who stand out in society, women have played a key role in the struggle of the people against the pandemic. They have contributed to this struggle as health professionals. They have organized supportive actions across neighborhoods during the curfew. They have conducted awareness campaigns regarding measures to fight COVID-19. They have provided psychological support to the affected families. The women’s associations—including those of the members of the WMW coordinating board—have mobilized to support women victims of violence, amid the hard conditions imposed by the pandemic. Enforcement authorities have prohibited women from leaving their houses during the curfew, even if they needed to run from violence, with no concern for their suffering or even for the fact that they might be exposed to the danger of being murdered.

Meanwhile, women have been assuming the leadership of most struggles, organized by different social and professional categories, such as the social struggles that Morocco has been facing over the last years, including during the pandemic. They have led the strikes organized by health professionals who require decent and safe conditions in their workplaces. They have led the rallies organized by contracted teachers who demand integration in the public sector. They have also led the strikes organized by rural workers who have been forced to work and who require means of sterilization and prevention against the virus in their workplace. Women have participated in the many popular rallies held in small marginalized cities that had been abandoned by the authorities amid the hard conditions of the pandemic and under the restrictive anti-COVID laws.

The World March of Women Coordinating Board in Morocco has been continuously supporting women’s struggles against the policies of impoverishment and humiliation that affect them. We offer our contribution to the popular struggles, to the struggle against the despotic power and against the malfeasance policies, requiring, among other things, the release of the prisoners of conscience. Women have also massively participated—together with the WMW coordinating body—in the rallies in solidarity with the Palestinian people to denounce the normalization policy openly adopted by the Moroccan regime, which supports war crimes and crimes against humanity committed by the Zionist occupation.

[1] L’économie de la rente in the original: exploitation, favoritism, a high level of corruption normalized by political power; abuse of power to enrich oneself in an illegal or illegitimate way.