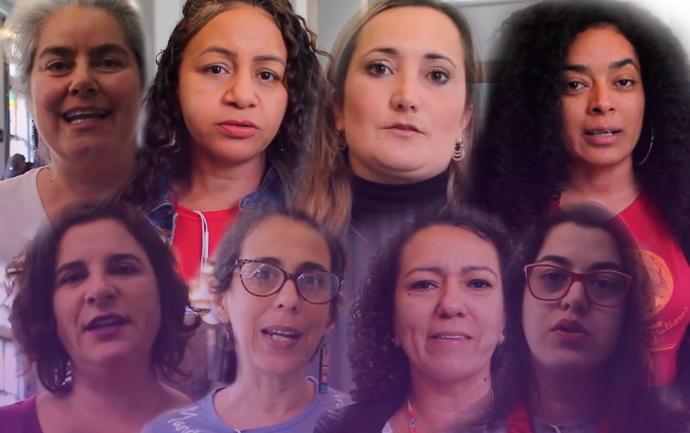 Women with the World March of Women (WMW), Friends of the Earth International, Código Sur, and Brazil’s National Confederation of Agricultural Workers (Confederação Nacional dos Trabalhadores e Trabalhadoras da Agricultura—CONTAG) share their reflections and knowledge on building grassroots sovereignty and how it articulates food, energy, and technological sovereignty. “Talking about grassroots feminist sovereignty is something new to me, but I realized it is what we’re doing from our territories,” says Alicia Amarilla of the Peasant and Indigenous Women’s Organization (Organización de Mujeres Campesinas e Indígenas—CONAMURI), Paraguay.

To struggle for grassroots sovereignty entails to fight the forms of violence that fuel an exploitative capitalist, racist, patriarchal model. Sarah Luiza, of the WMW Brazil, argues that there is a pressing need to understand, from an anti-systemic feminist view, “how energy and food are produced and how important it is for the people to be able to decide how and to whom to produce and how to allocate that food and energy.” In addition to Sarah and Alicia, the video also features: Alejandra Laprea, from Venezuela, Letícia Paranhos and Mazé Morais, from Brazil, Nikole Yanes, from Honduras, Mercedes Cabezas, from Argentina, and Johanna Molina, from Chile. Watch it:

The video was recorded after the workshop “Feminism and Sovereignties,” organized in São Paulo, Brazil, by SOF Sempreviva Feminist Organization on November 3-4, 2022, with 43 participants. It was part of a process of analysis and reflection on the topic, which also resulted in the publication of two documents. One of them, Pistas feministas para construir soberania tecnológica a partir dos movimentos populares [Feminist Clues to Building Technological Sovereignty From Grassroots Movements], came up from this need to organize the discussion around grassroots, energy, and technological sovereignty, putting the sustainability of life and women’s perspectives on center stage. The other document, Nós, mulheres, somos a energia que move o mundo [We, Women, Are the Energy That Drives the World], addresses the relationship between the feminist struggle and energy sovereignty through the history of the World March of Women in Brazil.