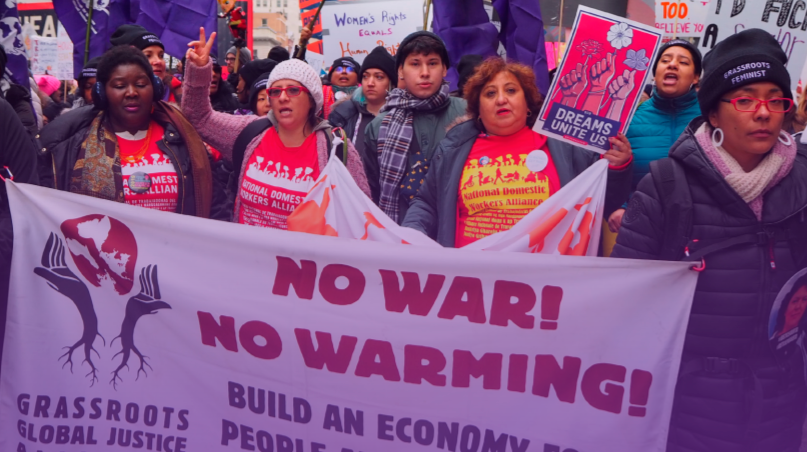 Feminist Peace Initiative: “The only green solution to the military is to not have it”

Kitzia Esteva-Martinez is a grassroot feminism national organizer of the Grassroots Global Justice Alliance and the World March of Women. GGJ is an alliance of grassroots community organizations that work for anti racism, workers rights, migrant rights, dismantle and abolish the prison-industrial complex, end militarism, and develop a vision of a feminist regenerative economy for people in the U.S. and in marginalized communities. Capire interviewed they about the motivations and agenda of the Feminist Peace Initiative.

What’s behind the concept of feminist peace?

The Feminist Peace Initiative it’s a movement driven by an orientation to building feminist U.S. foreign policy. It grew out of a relationship with the Grassroots Global Justice Alliance, Madre, and Women Cross DMZ, which have been working together for the last two years to build up the initiative. Last year we published a movement-driven foreign policy framework to connect at the intersection of feminism, revamping and revitalizing the peace movement in the U.S., to connect it closer to the racial justice movement and diasporic communities who have been impacted by the U.S. military.

We have been developing different political education and panel sessions to discuss intersections around U.S. foreign policy. We are situating ourselves in the political moment with the climate talks, at the COP 26, also knowing that the conversation about militarization, the contamination of the fossil fuel industry, the emissions that come from war and developing weaponry are not really counted in the justification of climate change. Inside of the U.S., we have a huge role to play as movements who are building an anti-military framework that is internationalist, because we know that the U.S. military has the largest emitter of greenhouse gases on the planet.

We wanted to bring that intervention to Glasgow, and to do something that brought back the responsibility of reducing and eventually dismantling the military toxicity that we experience in indigenous communities, black communities and migrant communities in the U.S., which we know is exported all over the planet. Our demands are to close and remove contamination from all the U.S. bases both inside the country and around the planet, defunding the Pentagon budget, the U.S. military police presence, ICE, ending weapons manufacturing and distribution and war profiteering.

What’s the relation between militarism and climate change? How can feminist struggles relate to the struggle for the planet?

Greenhouse emissions are one of the main causes of climate change. Generally the ways that  industries were developed under capitalism are actually not in a right relationship with the planet, bringing a level of toxicity in the atmosphere that is going to increase the temperature of the planet. For the last 26 years of the climate talks about reducing greenhouse emissions, catastrophe capitalism has done a really good job at figuring out how to move away from responsibilities and doing things like carbon trading, for example.

When it comes to militarism and military operations, the development and distribution of weapons creates a ton of pollution from nuclear extraction that pollutes the places where it is happening, all the way to nuclear testing. There is a huge carbon footprint that is attached to the ability to sustain U.S. military bases all over the planet.

A lot of politicians are talking, in the U.S. especially, about all these different ways in which they can make the military greener, but we know that the only green solution to the military is to not have it.

There are ways to reduce emissions but that’s not what we want because the U.S. military is a patriarchal and imperialist apparatus that is forcing communities all over the world to be under the U.S. regime.

We see that same logic applied to marginalized communities in the country, and it connects to a feminist agenda because actually it is women and children the first people impacted by the ways in which the U.S. military operates. Whatever there is a U.S. military bases, there is an increase in gender violence, human trafficking of women, not to mention all the ways in which the U.S. invading other lands has cost the life and human bodily integrity of tons of women.

The U.S. operates on behalf of corporate interest. The wars in the Middle East are actually for the corporations and their allies to have access to all of the fossil fuel that exists in the region. It’s all a question of the fight between U.S. plundering capitalism and the rights and dignity of women and children all over the planet. These are the ones that meet the brunt of the violence that comes from the wars abroad.

In many ways, we’re also the people that have the solutions and that have been developing strategies for cleaning up polluted communities, to having access to clean water. When we think about water and land protectors, those are the same people who are part of this feminist agenda to sustain the planet. If we were having these conversations with the people who have the true solutions, grassroots feminism would be at the center of this dialogue.

The main subject for November 10th activities is based on the impact of the U.S. military on climate destruction. Knowing that the U.S. military is based all around the world, what is the role of internationalism in finding solutions to this problem?

Folks have been fighting U.S. imperialism and fighting to close bases wherever there is one. Thinking through the different ways in which we are connected by the immense responsibility of sustaining our planet, we have to be concerned with both: the U.S. and any other fascist regime keeping a system that operates on war violence and occupation.

When we take action to close bases in other places of the world, when we are taking action together to lift up the voices and the leadership of grassroots feminists all over the planet, we are actually sinking ourselves in that question of how we’re going to sustain our planet, building a new perspective.

With the Feminist Peace Initiative we’re trying to follow the lead of the World March of Women on how we actually envision a newer way forward. A way in which we’re actually not just resisting the bad, which we will continue to have to do, but also building a vision of a future that is actually in right relationship with all the people on the planet. That is something that requires democratizing U.S. foreign policy, for example. The country would have to have a relationship to the rest of the planet that is true reparative for all the damages that its military has done.

We are invested in that work taking place in an internationalist way. The impact of policing and State violence inside of the U.S. communities makes us in complete and continuous solidarity and relationship with other people in the world who are also resisting. We must intervene at a global level to be able to stop the war machines that comes from fascist white supremacist regimes that are developing the priorities and the agendas for how the economy is run globally.

The activities also have the goal to uplift the voices and experiences of communities impacted by militarization. Do you want to sharesome experiences of organization?

I come from a migrant family from Mexico. We came to the U.S. after my nephew was diagnosed with leukemia, and it was at the beginning of the war in Iraq, in 2003. I had to cross the border, I was just 15 years old and I remember thinking that I was entering the empire. I was at that age, but already very aware of what the U.S. was doing. I have been organizing inside the Immigrant Rights Movement ever since. We are in relationship with social justice and feminists movements in other places of the world that are fighting U.S. imperialism and militarism because we actually experience it.

The U.S. migrant communities are in solidarity because we have a militarized border. In so many ways the police, the border patrols, and Immigration and Customs Enforcement operate very similar to how the U.S. military operates in other places in the world.

It’s all tied to the same monster of militarism, it’s a system of State violence that has been sustaining white supremacist capitalism. All that against the dignity and the lives of all of us. We must connect to fight back the war that we experienced in our communities, whether it is at home or abroad.