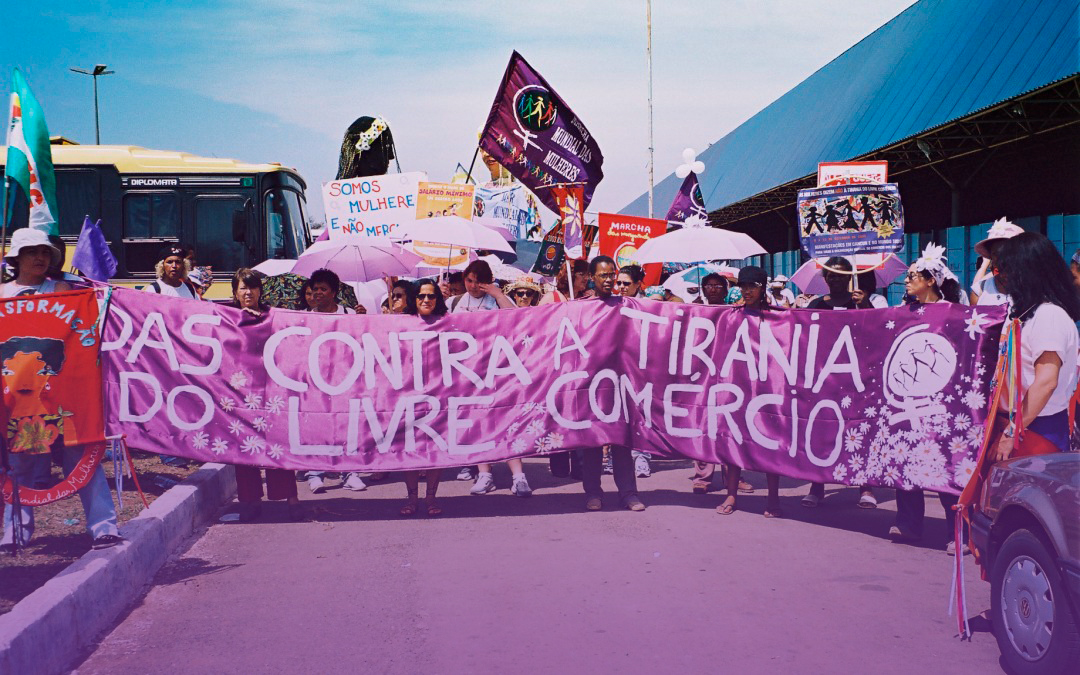 Lessons From the Struggle Against the FTAA: Continental Unity To Fight Free Trade

Grassroots movements from the Americas have accumulated experiences and a history of struggles for sovereignty and integration.

On November 5th, 2005, after a gigantic and unavoidable continental campaign, grassroots movements and organizations in the Americas secured a victory: the failure of the proposed Free Trade Area of the Americas (FTAA). While the Organization of American States (OAS) backed down, movements were pulsating in the city of Mar del Plata, Argentina, where the Peoples’ Summit was taking place concurrently and opposing the OAS-organized Summit of the Americas, where governments were negotiating the proposed agreement.

The 1990s and early 2000s were already marked by the imposition of a neoliberal economy across the continent, with structural adjustment policies promoted by international financial institutions (such as the World Bank and the International Monetary Fund—IMF), as part of the Washington Consensus, supported by imperialism. The FTAA was first proposed in 1994 by the then president of the United States, Bill Clinton, at the Summit of the Americas in Miami. The proposed agreement aimed to create an extremely unequal free-trade-based economic bloc among all countries in the Americas (excluding Cuba), which would strengthen the rule of the US in the region and the dependence endured by countries in the South.

To fight free trade, grassroots movements in Latin America and the Caribbean were pointing the way toward integration between the peoples and sovereignty. Well organized and in movement, they launched the Continental Campaign against the FTAA.

Massive demonstrations. Popular referendum. Grassroots education, agitation, and communication. For many movement, the campaign against the FTAA was a key process in organizing and leveraging strategic alliances and discussions. For Silvia Quiroa, a member of Friends of the Earth El Salvador, “it was one of the most significant experiences in the region’s contemporary history, because it was the beginning of victories against the neoliberal model.” For a generation of young militants, the struggle against the FTAA was basically education in action: in movement, by occupying public spaces, engaging in conversation with the population, organizing spaces for debate and reflection, a lot of lessons were drawn on anti-neoliberal struggles and the principle of internationalism.

Unity in diversity was the political bid that resulted in the participation of organizations of different sectors and peoples from all the countries across the continents, bringing together struggles that, to this day, neoliberalism aims to separate. As Silvia puts it, “as we conducted joint and organized efforts around the defense of common goods and with a perspective of regional integration based on class solidarity, we reaffirmed that political organization, mobilization, and education are fundamental tools for the defense of life and territory in the Americas.”

Nalu Faria, of the World March of Women Brazil, adds, “we were really able to turn the campaign against the FTAA into a grassroots campaign, with synergy, unifying, and massifying.” The mobilization addressed the economy and the impacts of free trade on people’s everyday lives as political topics that we should talk about and take part in.

The account by Sandra Quintela, of the Jubilee South Network, demonstrates it. “Also as an outcome of the campaign push against the FTAA, the media gave more exposure to the topic, as a lot of the press was covering the treat through an extremely positive lens. So those things that were covert had to become part of the agenda.” For this task of denouncing and publicizing it, grassroots media outlets played a crucial role. “With all their contradictions, left-wing social organizations as a whole were battling ideas in society. We won hearts and minds in this fight,” Sandra says.

The constitution of the World March of Women as a movement took place in the heart of this grassroots struggle against free trade and neoliberalism. The campaign against the FTAA was strategic to intensify the feminist critique of the capitalist economy grounded in the reality of grassroots women. Women have established themselves as political actors in transforming the economy, challenging the commodification of women’s labor, lives, and bodies. The campaign put political education into practice through action and space of building alliances and propositions grounded in people’s realities.

The conspicuous way how the market organizes women’s lives impacts their work, their everyday relationships, their subjectivity, and their relationship with their bodies, and imposes conservative standards and mechanisms of control. All these things were happening in the early 2000s, proving, on the one hand, how neoliberalism, patriarchy, and racism reinforce each other, while, on the other, how necessary it was to fight them with anti-systemic struggle, integration between the peoples, and sovereignty.

By saying no to the FTAA and refusing the proposed incorporation of women into a social chapter of the agreement, a broad sector of anti-capitalist feminism emerged in the region. This feminist movement has worked to have mixed-gender movements as a whole incorporate women’s contributions for the economy and as part of the social movement. “We rejected the vision of the ruling model according to which our work and our intervention have nothing to do with the economy but with ‘social’, as if these two realms could be separated. We have combined our self-organizing process as women with a process of alliances with social movements as a whole,” Nalu says.

We Continue to Struggle

The processes of organizing regionally and building alliances became stronger during the struggle against the FTAA, but they did not start or end there. Movements continued to make joint efforts in the following years, aware of the new attacks by imperialism, struggling to ensure victories and push policies forward in their countries and territories, also making a bid for regional integration as a strategy to build peoples’ sovereignty.

On November 5th, 2015, ten years after the FTAA was defeated, the left across the Americas had endured harsh coup processes, attacks on democracy, violence, and criminalization, and they were seeing new neoliberal attacks pushing hard—ultimately resulting, for example, in the assassination of Berta Cáceres in Honduras in March 2016, and the coup against Dilma Rousseff in Brazil in April that same year.

Gathered in Havana, Cuba, militants created the Continental Day for Democracy and against Neoliberalism, a regional platform bringing together grassroots union, feminist, peasant, and environmentalist organizations as well as organized territories and regions. In these last six years, this effort has organized decentralized demonstrations in 2016 and 2018, two continental meetings—Montevideo 2017 and Havana 2019—, debates, and actions for simultaneous local intervention, as well as organizing internationalist solidarity with the peoples affected by manifestations of neoliberalism such as militarism, authoritarianism, and blockades. Since the current health emergence was declared, this campaign has unified voices to denounce neoliberalism as the main cause of the crisis. Feminism and environmental justice are pillars intersecting the campaign, articulated with the defense of democracy and the integration of the peoples, as well as the struggle against transnational corporations and new free trade agreements.

In times of neoliberal re-establishment and foray, amid a renewed offensive by the IMF and other international financial institutions, and the increasing attacks of capital against life, the mobilization of the peoples shows us that, once again, no one here will yield.

Declaration of the campaign at the Anti-imperialist Solidarity Meeting, for Democracy and against Neoliberalism.

One of the efforts of grassroots movements struggling today is to continue to affirm internationalism and solidarity as political principles. These are key principles to fight for a society that puts life on center stage, based on integration and sovereign self-determination of the peoples, for reciprocity and equality.

Silvia Quiroa says, “there are many challenges posed today, even greater than the ones we faced when fighting the FTAA.” This is because, she argues, “violence against women has escalated, as well as the architecture of criminalization of social movements and grassroots organizations. Building internationalism and solidarity is a more pressing need than ever, as we face increasing threats against life, killings, and stigma.”

Dismantling the power of transnational corporations. Facing the far right and market authoritarianism. Securing and furthering democracy. These are key tasks for the peoples of Latin America and the Caribbean today. We see this in Bolivia, which resisted the coup and the violence perpetrated by the illegitimate Áñez government and fought to restore people power. In Colombia, where movements are holding nationwide strikes for peace, for the acknowledgment of the right to land, for a different government, and the end of political persecution and state violence. In Chile, which has risen against the neoliberal Piñera government and is now drafting a new Constitution. In Guatemala, where masses are taking to the streets for a plurinational state that acknowledges its Indigenous peoples. In Haiti, which faces political violence and interventionism. In Brazil, which is fighting Bolsonaro, a president who is slashing rights and denying the pandemic. In Venezuela and Cuba, countries that are resisting imperialism and the economic blockades that impact their food and medicine supplies. In the United States, struggling against racism and militarism, and defeating Trump’s authoritarianism. In these places as well as so many other places across the Americas.

We reassert what we have discussed more than 20 years ago: how important it for women to have a self-organizing process, as well as alliances with social movements from grassroots classes. Feminism is a political project of transformation that should be intertwined and have the same extent as the anti-racist, anti-capitalist struggle, as well as the struggle for ecological and environmental justice, for freedom, respect, and acknowledgment of diversities and sexualities.