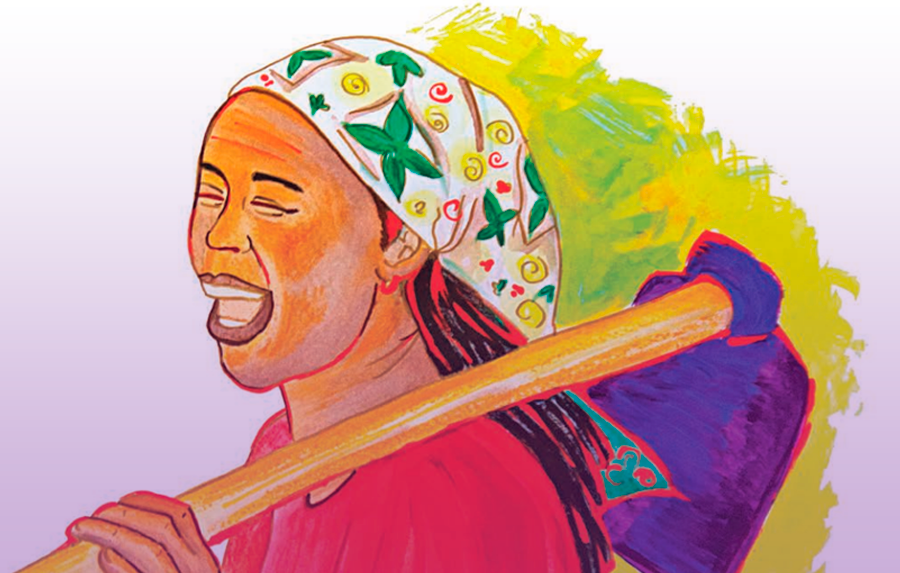 Read Friends of the Earth International’s paper on the links between feminism, agroecology, and food sovereignty

In 2017, Friends of the Earth International established a gender justice and dismantling patriarchy working group, which conducts a continuous process of political education, formulation, and alliance building to strengthen grassroots feminism and integrate this perspective into the organization as a whole. Acknowledging that women are overburdened and promoting equality as a strategy to build, support, and develop agroecological practices that feed the world are challenges posed by the organization. Sharing experiences of struggle and reflections has provided a stronger understanding that “without grassroots feminism there is no food sovereignty.”

At Capire we publish an excerpt from Friends of the Earth International’s latest position paper on the topic, which is the outcome of a conversation between its gender justice and dismantling patriarchy working group and its Food Sovereignty program. The full paper is available in Spanish, English, and French.

Links between feminism and agroecology: Why is a gender justice and dismantling patriarchy perspective pivotal to our vision of food sovereignty?

“At the intersection of agroecology and feminism, women construct a collective identity as subjects of rights historically denied to them.”

Agroecology is feminist because it is founded on environmentally friendly relations of production as well as equitable and egalitarian power relations (key feminist principles and practice).

For Friends of the Earth International, building Food Sovereignty entails awakening the political subject in women. That is why we do a lot of political formation on Gender Justice within all the programmes of the federation in order to build a new world.

With the sexual division of labour, women are historically and socially responsible for taking care of the household, the children and the seeds, throughout the world. Food sovereignty is the peoples’ struggle for their self-determination, and defending native seeds is a central component, and therefore must be promoted alongside feminist struggles for the emancipation and autonomy of women.

A slogan that has become increasingly important in recent years to guide our work as Friends of the Earth International, which we share with allied movements including the World March of Women and La Via Campesina is: “There is no agroecology without feminism”

Historically, women have undertaken a large part of the actions related to the entire system of life prevailing in rural families such as caring for seeds, defending water, sustaining life within the family, in struggles for land and territory and comprehensive agrarian reforms. We need to re-examine the role that food has in sustaining life and how we women have fought for essential goods for life.

Placing the sustainability of life and environmental and social justice, alongside feminism and feminist economic analysis as the central axes for organising our societies, allows us to show the relationships of reciprocity and dependence between human beings and nature.

“We value the role of women in agriculture not because we are mothers, not because we have a biological connection to Mother Earth, but because we have a historical, spiritual and activist connection to our territories. We do not rely on a “so called” biological destiny to justify the value we place on women in agricultural roles,” says Celia Alldridge, recalling the GJDP working group’s commitment to integrate the ecofeminist perspective across the federation, as a philosophy and practice that advocates for changing the prevailing social fabric in a manner that respects the material and relational bases that sustain life.

We want to dismantle all structures of power and oppression on the basis of an anti-capitalist, grassroots, peasant and grassroots feminism built with women and LGBTQ+ persons through political action, in the struggles that we wage in the streets and territories.

The prevention of violence against women and LGBTQ+ persons is also a principle that the feminist movement has built into the food sovereignty movement and agroecological practice. This is aligned with our internal Friends of the Earth International process to integrate the prevention of gender violence into all our solutions.

The Food Sovereignty and Agroecology paradigm, with its practice of solidarity, is a clear way of modelling system change and including the feminism that is promoted by Friends of the Earth International, through “collective actions that challenge gender roles as well as paradigms of inequality, oppression and exploitation,” as summarised by the Global Network for the Right to Food and Nutrition.

However, “here the question arises of how movements can construct global strategies to bring back or revive the memories of production and food sovereignty from and for traditional Peoples, particularly peasant women. This should be from the perspective of the construction of a food culture that is not linked to the globalised production model. From the grassroots, systems of production and reproduction of life were created wherein women have a central role. Women have not necessarily been recognised as political participants in the construction of these systems, but their foundations were secured through women’s labour.

“Now, it is clear that it would be counterproductive to reproduce the sexual division of labour that brought us to this crisis in the care economy, and which led to increased pressure upon women. We need to undo this, but how? One way is to consider care work as work which is essential to the economy, while remembering that it must be taken on not only by society but also by the State. Therein arises a dispute with the State.”

In keeping with this, agroecology “allows the overcoming of many of the dichotomies that reinforce the sexual division of labour throughout the food system and make women’s work invisible.”

From a feminist economic perspective, one of the challenges to economics based around life is that, “women underpin the economy and bring more than social issues to the transformative agenda. In other words, women do not solely come from the perspective of oppressed people denouncing oppression, exclusion and exploitation but they also build reality from different economic practices amidst injustice and discrimination. This economic practice identifies the connection between life and the possibility of transforming the economic system. This is key for defining the path towards transformation and establishing the roadmap towards recovery.”

Agroecological practices offer the possibility of people carrying out productive tasks with greater gender equity and fostering greater autonomy for LGBTQ+ persons, whether in indigenous and rural family farm production or in work cooperatives. Consequently, this agroecology and feminism approach is also linked to the promotion of feminist economies.

We know that the only just and environmentally friendly system is agroecology and it also entails that women can participate. There are serious problems of inequality rooted in capitalism and patriarchy that we want to dismantle. We want equality and equity for all. We want women to be part of a production system that is more just, so that they are able to make their own decisions, which will end up benefiting them and their communities. Because we cannot have environmental justice without gender justice, and we cannot have gender justice without the participation of women. This is key to understand the relationship between oppressive systems.

The traditional analysis of food production (both agroecological and industrialised) has reduced land, women as farmers’ wives, animals and nature to production factors in a “male production process”25 thereby translating their value into pure economics. For that process to work, women, livestock and nature are treated as machines to be optimised for maximum productivity, which has led to overexploitation and overlooking their intrinsic value.

[…] If we want to change the system, we must also fight to dismantle patriarchy.

“As a grassroots environmental and social justice federation, Friends of the Earth International sees system change as crucial for the transformation of our societies. We recognise gender justice and the dismantling of patriarchy as key to achieving this transformative change. In other words, we believe that our vision for social and environmental justice will become a reality only when we challenge and dismantle the systems of oppression which work together to concentrate power in our societies, through the exploitation of our bodies, work, territories and nature. These are systems of oppression founded on patriarchy, class, capitalism, racism, neocolonialism and heteronormativity. We affirm grassroots, anti-capitalist feminism as an essential tool to achieving equality, gender justice and, ultimately, system change.”

It is key for Friends of the Earth International to address this struggle jointly with comrades from the World March of Women and La Via Campesina who have experience working with a feminist perspective.