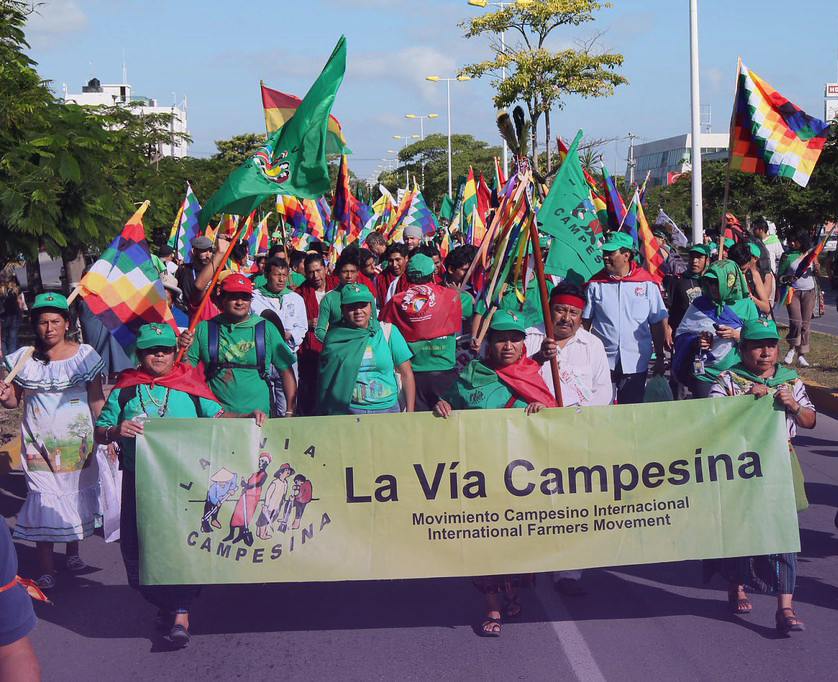 The Declaration of Peasant Rights was approved by the United Nations (UN) on December 17, 2018. This achievement was a big victory for the peasant movement, which had passed through a long process to build the core political bases of the Declaration, write it, and propose it as an international legal instrument. Now, four years later, some of the experiences of use of the Declaration are being tested to claim rights and propose public policies.

“It’s been four years since the Declaration’s approval; now it’s time to look back and say that we’ve advanced towards recognition of our cultural, territorial, and professional identity as peasants”, suggests militant peasant Perla Álvarez; she continues: “This diversity composes the peasantry.  The fact that they have recognized us through this Declaration is a very important step”. Perla Álvarez is member of the National Coordination for the Organization of Women Workers, Rural and Indigenous Women [La Coordinadora Nacional de Organización de Mujeres Trabajadoras, Rurales y Indígenas] (Conamuri) and of Peasant Rights Collective of La Via Campesina [Colectivo de Derechos Campesinos de La Vía Campesina].

“We’re very grateful for the struggle of these four years”, says Martha Elena Huertas Moya, who is a member of the Human Rights Collective of Latin American Coordination of Peasant Organizations – CLOC-La Via Campesina [Coordinadora Latinoamericana de Organizaciones del Campo] and also member of the National Federation of Agricultural Cooperatives [Federación Nacional de Cooperativas Agropecuarias – FENACOA]. “La Via Campesina has been developing a very important plan of attendance, pressure, and diplomacy with the United Nations, the different governments, and institutional spaces for recognition of peasant rights”.

According to Perla, this has only been possible thanks to a political alliance strategy, which is to be kept and strengthened. Guaranteeing that the Declaration is widely taken into consideration and used also depends, according to her, “on us, as organizations, having a deep understanding of the Declaration; assuming it as an instrument in our struggle, and disseminating our challenges”.

Martha explains that the process of implementing the Declaration of Peasant Rights in Latin America and Caribbean had several stages, the first one being precisely its disclosure within the organizations members of CLOC, through meetings, seminars, among other training and discussion activities that have been highly relevant to strengthen the organization itself and its proposals. “The recognition of the Declaration has always been part of the political alignment we had in the CLOC organizations in Colombia, defining our discourse around the rights to be recognized, the process to achieve this, and the path we should follow to be able to make it happen”, explains Martha.

“One of our challenges is how to implement the Declaration in public policies”, summarizes Perla. “We want the policies related to land and territory to be based on the concepts applied in the Declaration: the peasant actor; the right to land, to territory, to natural goods for production; the right to organizing and respect for fundamental freedoms”. There is also the challenge to advance into the creation of an institutional mechanism capable of guaranteeing, within international agencies, that the Declaration is being followed up, “so that it may be used to talk of young people in rural contexts, of women, of development, of seed production”, she defends.

The proposals of use of the Declaration differ from place to place according to the degree of political disputes involved. “In Colombia, we knew we had to start by disclosing the Declaration in the Legislative Branch, in addition to requesting the Ministry of Foreign Affairs and the Ministry of Agriculture to incorporate it into their portfolio”. Peasant organizations gained more space to make political propositions with the recent victory of Gustavo Petro’s and Francia Márquez’s administrations, under project “Colombia: Global Power of Life”.

Within this new political context, the first National Peasant Convention happened and was attended by 2,500 peasants. According to Martha, “the government talked to peasants about the implementation of agrarian and rural public policies, and this is all based on the Declaration”. Negotiations are laying the foundations of three key elements: full rural reform, restitution of lands, and creation of a rural and agrarian special jurisdiction. “It’s important to discuss restitution because expropriation was one of the fundamental denounces of acts that undermined the country”, the militant says.

A key element proposed in the National Peasant Convention was the creation of the Peasantry Assembly, at which public policies for the administrative structure of Colombia will be defined in departments, municipalities, and locations. “In short, the Declaration that La Via Campesina created, conceived, struggled for, and positioned in Colombia is a reality now that gives us hope of a new condition for Colombian peasants”, says Martha.

There are already several experiences of actual use of the Declaration around the world. In Latin America, there is also the case of Paraguay: the Declaration has been used as a valid argument to sanction the country as a violator of peasant rights in the event of death by pesticide poisoning. In Argentina, it also served as argument to give back territories to peasant and Indigenous communities. Meanwhile, in Cuba, the Food Sovereignty and Food and Nutrition Safety Act has been enacted, coming into force on October 28, 2022, inspired by the Declaration of Peasant Rights, as stated by Adilen Roque, spokesperson of the National Association of Smallholders [Asociación Nacional de Agricultores Pequeños – ANAP], member of La Via Campesina.

Other countries are using the Declaration in the recognition of the peasant actor, who has been historically set aside by laws. In Asian countries, such as Indonesia and India, the Declaration has been used to guarantee peasant rights in terms of production, market assurance, and their recognition as rights-bearing individuals. For Perla, these experiences, as solid as they are, “demonstrate the validity of an instrument of human rights – such as the Declaration – on an international level”.

Experiencing these changes deepens the struggle and increases the will to organize. For women, hope also moves them forward to build peasant and grassroots feminism and to establish more spaces of leadership, fighting against misogyny and work overload. Martha explains this very well: “the experience of being in peasant organizations led by women opened up beautiful possibilities for us to be heard, recognized, admired, supported, to be truly valued. Other languages, other values, other principles are in the core of these movements, in which we don’t want to shine as individuals, since we women together make leadership happen. Recognition of peasant rights gives us the possibility of claiming, as from a new place, the end of femicide, violence, patriarchal hierarchy”.

La Via Campesina is celebrating 30 years of struggles, hopes, and organizing with tag #LVC30Years. In November 2023, it will celebrate its 8th International Conference and its 6th Assembly of Rural Women. These will be spaces for discussion, assessment, and collective construction of the peasant movement in Nicaragua, on which there will be a comprehensive process of collaborative and militant communication coverage.