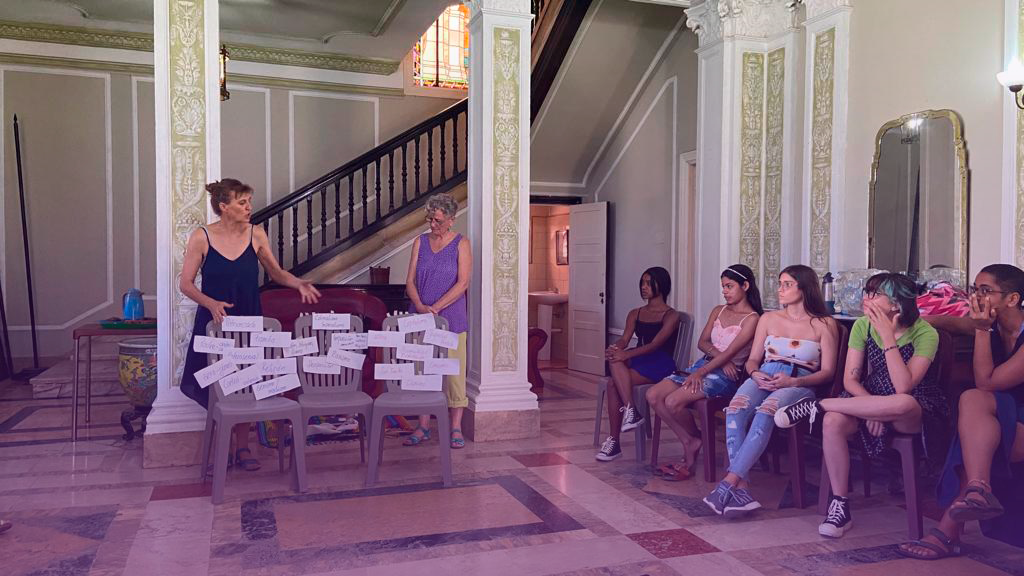 For a while now—actually through an initiative by Capire and the World March of Women Americas—, I have become closer to the investigation regarding community-based and grassroots communications from a feminist perspective in Cuba. I think that, if there is something that we, who work with this kind of communication, must do, it is to stop and look at how we are doing it and what more can we do about it. In Cuba, we have a set of premises regarding community-based communications.

One of the key issues that must be taken into consideration when we think about community-based communications in Cuba is the fact that information and communications articulate rights. In fact, information is the key factor of grassroots communications. It must be taken into account across all aspects of life that foster the creation of cultural codes for the development of common activities, forms of resistance, and alternatives. This is a pathway that rebuilds tactics and strategies, as it strengthens grassroots work for the interaction with the people. For this reason, it is important to take it into account—not only from a communications perspective, but also in terms of political organization.

I want to look back at some topics related to the history of communications in Cuba. These topics often become “fashionable,” but we should consider that, in Cuba, everything related to means of communication started to expand from the institutions. Community radio and TV stations were made available and guaranteed to help put in motion this kind of communication. Of course, there are some problems around this: they come with institutional views and maybe it is time to change roles based on that. But radio and TV stations are unarguably in the communities, even in those hardest to reach, and this has allowed us to do a different kind of communication. These initiatives have been fulfilling their role in some places of the country and define, according to my research perspective, the paradigms of communications.

Community-based communications in Cuba is, above all, emancipatory. First of all, for its liberating essence. It is not simply a research category—it is a field of struggle, a refuge of historical, cultural, political, ideological, and symbolical meanings, and it must have, above all, a common meaning for the majorities.

Honestly, when we think about how a blocked country uses community-based communications, I would say that, if there is an advantage to it, it is precisely about doing more with less. When we talk about grassroots communications in Cuba, we are not talking just about communication. The means of communication are grassroots-based; they have been able to reach the population and take information to them. In Cuba, there is usually an organization in the territories that allows this communication to be different.

I am talking about, for example, the communication efforts carried out in health care. During the pandemic, if we had not found a way to communicate at family doctor’s offices, through word of mouth, through people, through posters on the entrance of buildings; if we had not organized experiences such as the Committees for the Defense of the Revolution [Comités de Defensa de la Revolución—CDR] and the Federation of Cuban Women [Federación de Mujeres Cubanas—FMC]; if we had not gone “door to door” to check who was sick and what their symptoms were as a way to support medical services—then it would have been really difficult to make grassroots, community-based communication work in an articulate manner to reach people during these times.

If there is a strength to this kind of communication on the island, it is the existence of community radio and TV stations, even in the most remote communities. One of the greatest achievements is the community TV station of Sierra Maestra, Televisión Serrana. Sierra Maestra is a hard-to-reach area that was able to take TV to the reality of the people and the communities, to the extent that the shows of Televisión Serrana are broadcast on national television. Getting one minute of airtime on national television is not an easy thing to do, in Cuba or anywhere else in the world. Let alone when it comes from a small community TV channel, where the community itself constitutes the major actors that make this dream a reality. I think it is a very advanced step to successfully show this reality on TV. Moreover, when journalism award ceremonies are held in spaces such as the Union of Journalists of Cuba [Unión de Periodistas de Cuba], these are the TV channels that somehow gain visibility in cultural spaces—the work carried out in these areas is acknowledged.

There are many ways to reach people. And I think we have a lot yet to do.

One of the biggest challenges we are facing today is to be able to further reach out to people, and that they can also build communications. So that communication does not happen vertically, but becomes horizontal, where everyone can pitch in.

People in the neighborhoods must take hold of these tools to make sure the tasks of our leaders are really coherently executed. To be able to look at women’s real situation and know where they are coming from, we must exercise community-based communications coming from feminist views, including the views of the Federation of Cuban Women.

There are many experiences of community work in Cuba. When we talk about community-based communications from a feminist perspective in Cuba, we have to mention the work conducted by the Martin Luther King Center [Centro Martin Luther King—CMLK ]. The CMLK has been moving forward on this topic in numerous communities across the country, based on a liberating theory. There are also alternatives that have emerged during the pandemic, and I would like to point that out, because they have been done in different ways. We were forced to be apart and were not able to see face to face. And we were able to create or strengthen, through social media, the networks we have in the neighborhoods.

A significant example is the Cimarronas collective, one of the greatest symbols in pandemic times. The Cimarronas are a group of women and young university students who identify as feminist, and it was created two and a half years ago, just before the pandemic began. They joined social media and started to reach out to people, especially young women and teenage girls who were staying at home, delivering feminist messages to them. And they did that based on a new vision, with a very interesting diversity. They also started to discuss current affairs. The strong point is that we also started to address gender issues through alternative means.

Secondly, I would like to mention the actions conducted by the Berta Cáceres Feminist Space. While this movement had been structured for a long time, it managed to achieve an unthinkable magnitude in terms of work. Through it, we were able to address relevant international matters.

Addressing and presenting reality is very important to us. I am the director of a magazine called Muchacha, published by Editorial de la Mujer, of the Federation of Cuban Women. It is a magazine that targets a very young demographic. It is a printed publication with circulation at newstands, but its circulation was cut due to the reality of the blockade against Cuba. In Cuba, we don’t have enough paper, but we can do something to promote means of communication dedicated to different audiences, and this is one of them.

In pandemic times, when we ultimately stayed at home, there was an interesting movement as we changed our way of thinking. We reached the conclusion that our magazine was basically not a printed publication anymore, but we hoped it could continue to circulate. So we decided to take it to social media. This is a magazine that usually finds its actors at schools, high schools, and preparation courses. At this point, we could also start meeting our audience through social media. Our call was dedicated to working with this kind of grassroots communications on social media. And so we held in-person workshops with teenagers and young people. And we continue to address, through social media, topics related to busting the myths of masculinity in Cuba, establishing new kinds of masculinities, with conversations about violence from a gender perspective. In addition to Muchacha magazine, other spaces started to address community-related topics from a gender perspective. One of them that we should point out is the column Gender Letters [Letras de Género], by the journalists Dixie Edith e Ania Terrero.

All this has been a huge challenge, especially because of the limitations Cuba faces today in terms of internet connection. It is no secret that internet in Cuba can be extremely expensive. Even though means of communication have some kind of connectivity guaranteed, it is not always enough for us to work on this. Nevertheless, we are able to maintain this kind of communication on our social media and our message will continue to get through.

Marilys Zayas is a journalist. She is a member of the Federation of Cuban Women and the World March of Women Cuba. This is an edited version of her presentation during the webinar “Poltical Strategies of Grassroots Feminist Communications,” held by Capire on July 5th, 2022.