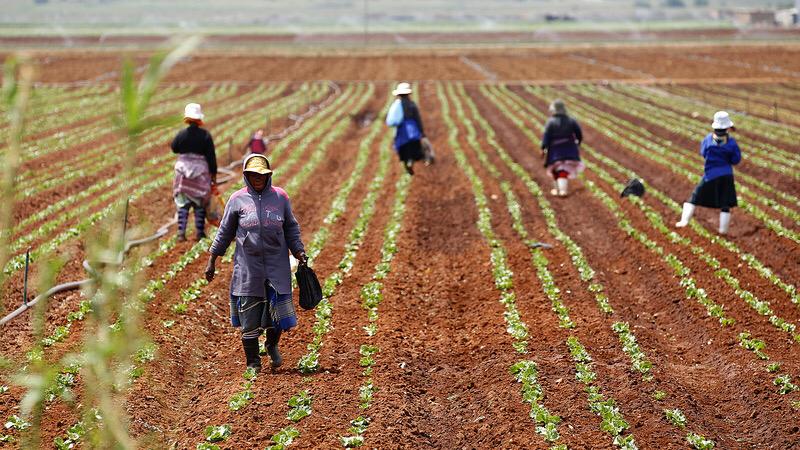 Women defend their land and community against the brutality of capitalism in inland Morocco. Also available in Arabic.

By the Middle East and North Africa World March of Women.

Land rights defenders, as they are named by the Observatory for the Protection of Human Rights Defenders in its 2014 annual report, face numerous threats and attacks. Conflicts escalate in many countries worldwide, with the number of people, groups and populations who suffer violations of their human rights being increasingly higher. It results specifically from high-investment activities and megaprojects conducted by extractive companies, agribusinesses, lumber companies and real estate developments, all of which, many a time, count on the support of powerful authorities in acting against the interests of the population, directly or indirectly evicting rightful residents from their lands.

Women are considered to be the group most affected by the violation of the land rights. Companies with strong economic power take over lands, often supported by a political power and by the patriarchal society, stealing from women their land rights.  In addition, they rely on discriminatory laws based on traditional and unfair rules to justify their prevalence over women’s rights.

The right to land is not only a civil right, but also the guarantee of key access to land for food and income production.   It is also ‘one of the social and economic pillars that guarantee the maintenance of cultural identity, political power and participation in local and national decision-making processes’. According to the World Food Programme, women face numerous persistent legal, economic and sociocultural barriers precluding their access to land and other productive resources. It is also observed that in many countries where peasants occupy a prominent position, land becomes the main source of income and a valued labor sector, which means that land is directly connected to power.

The socioeconomic and political status for women is inferior when they do not enjoy the same land rights as men. Access to land rights gives women autonomy and enable their voices to be heard in several areas of the rural environment, allowing their participation in the decision-making processes within family and community.

In Morocco, women are fighting for land rights, and amid all matters involving such fights, we find in different regions the fights of the Soulaliyat women. Such women are from traditional communities who live in extensive regions where land use is collective and shared. However, the authorities have transferred land title to men, excluding women from the right to ownership as a political strategy to make way to land appropriation by companies that, on their turn, explore the families’ impoverishment in order to acquire those lands.

As explained by the Observatory for the Protection of Human Rights Defenders, Soulaliyat women are exposed to a series of violations and attacks. They run the risk of being imprisoned, tortured, unfairly judged, threatened and physically assaulted through a plan that seeks to uproot and weaken the fight for land rights.

One of the activists in the Soulaliyat women group in Salé (north-western Morocco) said: ‘we are simple people, but we are facing a more powerful man’. That is to say, the owner of one of the country’s most powerful real estate companies that plundered and seized the people’s lands with the support of the authorities. The government, on its turn, confronts the community by oppressing them with coercion and arbitrary curtailments, even of the most basic civil rights. Exercising such rights, including the right to form an association that represents the community, is a way of fighting against the company.

The ‘collective lands’ acquisition system is considered to be one of the most ancient systems of such kind in Morocco and is based on a combination of community traditions, Islamic references and modern law. This legal status in particular has terrorized women who lived on those lands, to wit, Soulaliyat women.Your text hereYour text hereYour text here They are set apart, with no power to enjoy the full rights of use of their own lands… when there is collective expropriation intended for the public benefit, they are denied compensation. However, in most cases, Soulaliyat women must defy powerful private companies and, frequently, powerful people who benefit from their proximity to the decision-making centers to take over their lands.

The World March of Women is a global feminist fight movement against different forms of oppression, exploitation, discrimination and slavery to which women are subject. Land rights pertain to one of the areas of action to face exclusion, discrimination and poverty. The patriarchal system is supported on women’s oppression, and capitalism is a system for exploitation of minorities, both men and women. Such two systems reinforce each other, rooted in and intertwined with racism, gender discrimination and discrimination against sexual diversity, misogyny and xenophobia. They are supported by colonialism and imperialism, resulting in slavery and forced labor, making way for models that preclude women’s and men’s emancipation, creating poverty and exclusion, violating human rights and putting humanity at risk.

It is necessary to adopt a methodology that connects the global and the local circumstances in addressing the matter of women and the land rights, just as the World March of Women does. Women around the world face very similar hardships and challenges in the fight for land rights. Such fights are influenced by particularities of the political, economic, social and cultural conditions of each location that differ from one another. Nevertheless, the specificities of the local fighting conditions should not prevent the use of global solidarity mechanisms between women, observing what unifies and consolidates their situation. Above all between those who confront the patriarchal and the capitalist system, which, on their turn, depend on the oppression and exploitation of women to guarantee their own continuity and strengthening by using the very same tools and mechanisms, discourse, retrogressive and antidemocratic values in different regions around the world.

No tradition, custom, religion, ideology, economic or political system should be used as justification to treat anyone as inferior neither to allow damages to their physical and psychological integrity.

This article was prepared by the World March of Women from the MENA region (Middle East and North Africa) and originally published in Sairat Journal, the MMM regional blog.

Translation from Arabic by Vitória Trombetta.