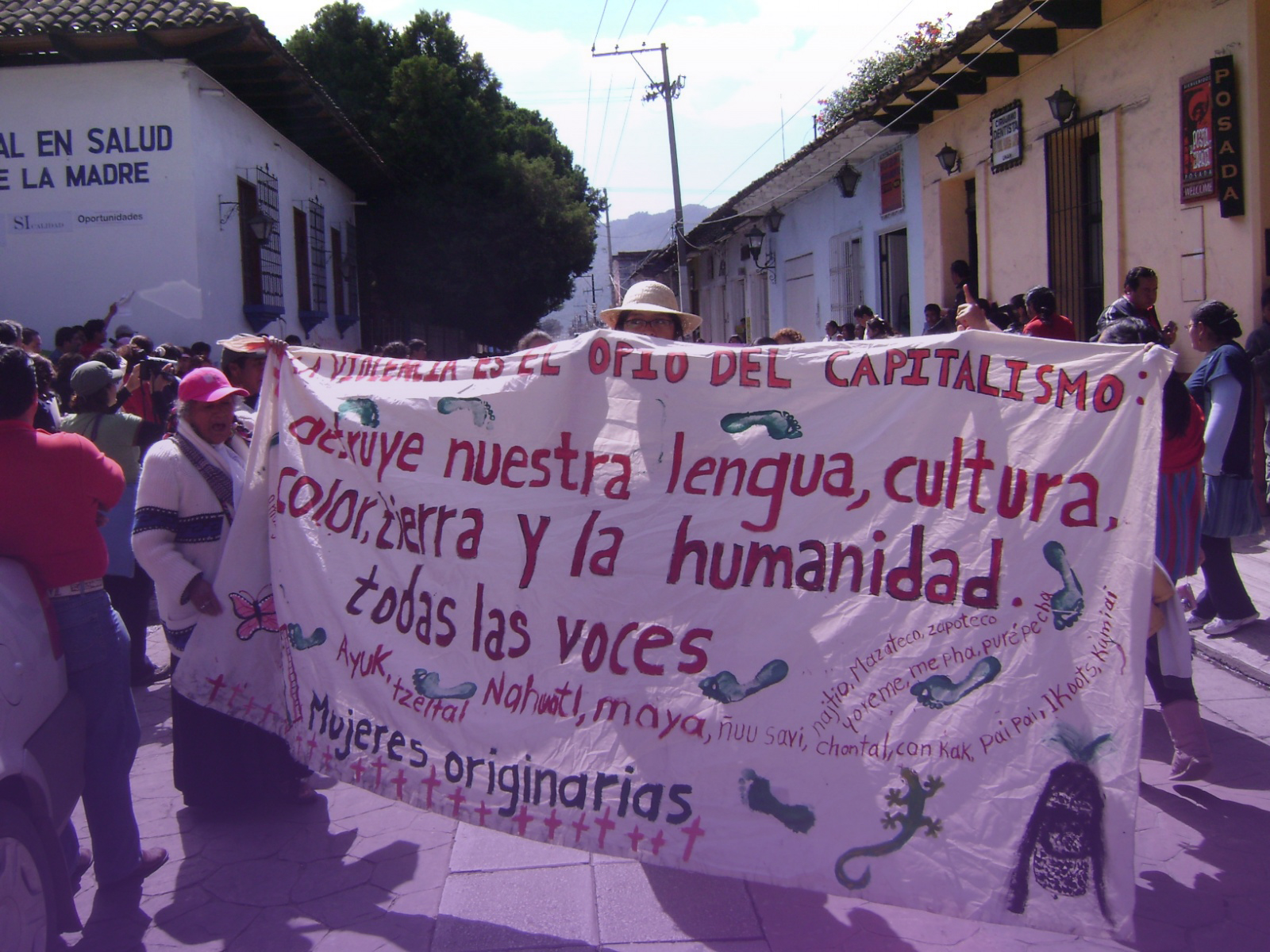 What is the industrial digital agriculture and why is that a threat to food sovereignty?

The Action Group on Erosion, Technology and Concentration [Grupo de Acción sobre Erosión, Tecnología y Concentración] (ETC Group) is an organization with a 40-year history. The letter ‘E’ is for erosion, meaning erosion of nature, rights, and cultures. ‘T’ is for technologies, as we closely watch them, question them, and denounce technology-related abuses. The letter ‘C’ relates to our monitoring of corporations and business power. We have previously worked to denounce nanotechnology, which is manipulation of life on an atomic scale, and have been for a while denouncing biotechnologies, usually called by their friendly name ‘life sciences’, as well as the GMOs.

As tools capable of manipulating life on molecular and atomic scales have been developed, there has emerged a trend to blur the frontier between what is alive and what is not. Through lens, microscopes, cutting-edge technology tools, different types of matter are now treated as one same thing: a molecule with a certain number of atoms may be part of an inert object or of a living organism. It has been used in scientific development to further reify life, turning it into a target of manipulation, disregarding ethics and despising the relationships existing between living beings and their environments. The ETC Group has been monitoring it, seeking to understand how digitalization has been working in agricultural processes and in manipulation of living beings. These techniques are not making life easier. In fact, today, we witness how the dominant science has been promoting a deeper level of contempt for life.

During the pandemic, digitalization processes around behavior, consumption, production, and labor relations infiltrated everybody’s lives. It took digital corporations, which already had much influence, to the front line of economy, technology, and innovation. So, we are now living a situation in which players that had never had any interest in food systems are fully dedicated to influence, shape, and exploit them.

The illustration above shows the industrial food production and consumption chain. On the left corner, the digitalized rural area. Then we see greenhouses and confined animals, all connected to the Internet of Things. On the right corner, containers traveling across the sea. Everything is managed through satellites, in gigantic data networks called blockchains, which, without even having to be cleared through customs or the national bureaucracy, execute commodity purchase contracts on their own.

Then we have food processing, where the processes of turning crops into merchandise are automated. It is here where robots incorporate artificial flavors and preservatives into food. Lastly, the uberization of consumption. The illustration shows how goods are added to an online shopping cart through a mobile without any direct relationship between those who sell food and those who buy it. In the end, there is a person consuming food while looking at their mobile. This person continuously receives suggestions on what to buy; they order, then food arrives. It sounds like some kind of parody, but this is the digital food chain.

Data is information that, being encoded, can be managed from a computer. An example: if someone sings a song or declaims a poem to me, this is information, and it is pleasing to hear that; on the other hand, if I encode it in zeros and ones and save it as an audio, image, or text file, then it becomes data.

The digital food chain and the digital transformation processes in general need to manipulate a big amount of data. The things an individual data user handles do not compare to the amount of data necessary to execute production processes. This is highly important because many organizations, countries, and communities receive offers to enter the digital world, but will never have the capacity to manage the so-called big data, that is, the big data volumes. Only the gigantic technological corporations that have reached the peak during the pandemic have such capacity: Google, Microsoft, Tesla, Facebook – the latter now sells underground cables to transport big data volumes from Africa to America, following the same routes once traced by the slavery trade.

A megacorporation owns the cable infrastructure, another one owns satellites, others own clouds… Amazon is the main supplier of cloud services. A cloud is a huge building, as big as a hospital or a shopping mall, located in a cold place so as to reduce costs to maintain the temperature of the engines that process data. The million computers that manipulate these big data volumes are within the ‘clouds’. So, when we hear that we can have our own blockchain, or that we may look for alternative servers, it is only partially true, because this environment is dominated by half a dozen corporations.

In an automated food production, new data are generated throughout the chain, from the seeds at the farm to the person who receives food at home. This is what owners of mobile companies, clouds, Alexa, tablets value the most: individual and collective data reorganized into a new merchandise, sold as ‘consumption profiles’, political and economic preferences profiles, mobility, health, economy systems.

The first group is the agribusiness old school: Bayer-Monsanto (which we know better thanks to the denounces made by the peasant movement), John Deere (main manufacturer of agricultural machinery), Yara (fertilizers), JBS (meat), Tyson and Cargill (which sell commodities), Nestlé and Pepsico (food processors), and then Uber Eats and Deliveroo (delivery services). These are the main players. There are others, but their overall number is really low.

The second group is formed by the data titans: Google, Amazon, Facebook, Apple, and Microsoft, as well Baidu, Alibaba, Tencent, and Xiaomi, from China. And, finally, the investment management companies Blackrock, Vanguard and State Street, mostly. These two groups are new players that have been invading food systems; they do not care about nature, agriculture, let alone the right to nutrition. Food production going digital is nothing but a new business opportunity for them.

The digital transformation entails an imposition of techniques and tools designed without taking into consideration the voice and contribution of people who will be directly affected; such techniques and tools are designed to use nature and labor force in a supposedly more effective way. This process will increase exploitation of surplus value and prompt a deeper dominance over nature and labor force. An example that has become common lately with Zoom is that we are working more. It seems to be a big advantage, but we are losing labor rights, autonomy, and power to manage our time, which is vital. Plants, forests, and waters are being quantified through digital agriculture sensors. The value of every inch of grass, of every process of vital cycles is measured and negotiated at stock exchanges around the world.

The biology of crops, the fertility of soils, the local knowledge of the several civilizations of which we are part are reduced to data through these approaches. The World March of Women states that, a statement which is quite feminist. When digital tools reach the rural zones, companies start to have access to tons of information they did not previously have about the peasant production systems. And they jeopardize the autonomy of decision-making regarding what will be cultivated, how it will be cultivated, processed, and distributed.

We have identified  that digital agricultural platforms are designed mostly to incorporate small-scale production. Microsoft and other digital corporations are interested in undermining the smallholders collectivity, concentrated in peasant regions of Asia, Africa, and Americas. They want to destroy the decisions that still keep communities together and that guarantee collective territory rights, and that, after all, keep the world alive, because most food comes from these communities.

In peasant agriculture areas, digitalization focuses on payment methods to impose informal economy and extract individual information through phones and tablets. This is the dream of big digitalization, but it only happens where there is connectivity, lots of antennas, a good deal of rich people… So in most peasant and family agriculture areas, we are now being flooded with devices, phones, drones. And as information flows through digital means, many legal frauds are being committed, such as in foreign exchange transactions and in asset distribution, frauds artificially made legal by technology corporations themselves and their partners in the agriculture and food industries. For instance, in Brazil, Bolivia, Argentina, Colombia, and Paraguay, lands are being taken by satellites that establish new “registrations”, in which communities have no voice to claim their land and ancestral rights. And how they intend to do that? By nullifying the collective strength.

Verónica Villa lives in Mexico and is a member of ETC Group. This article is an edition of her speech given at the Latin-American Forum for the Assessment of New Technologies, organized by the Latin-American Network of Social Assessment of Technologies [Red de Evaluación Social de Tecnologías en Latinoamérica (Red TECLA)] (TECLA Network), on November 10, 2022, in Santiago, Chile.