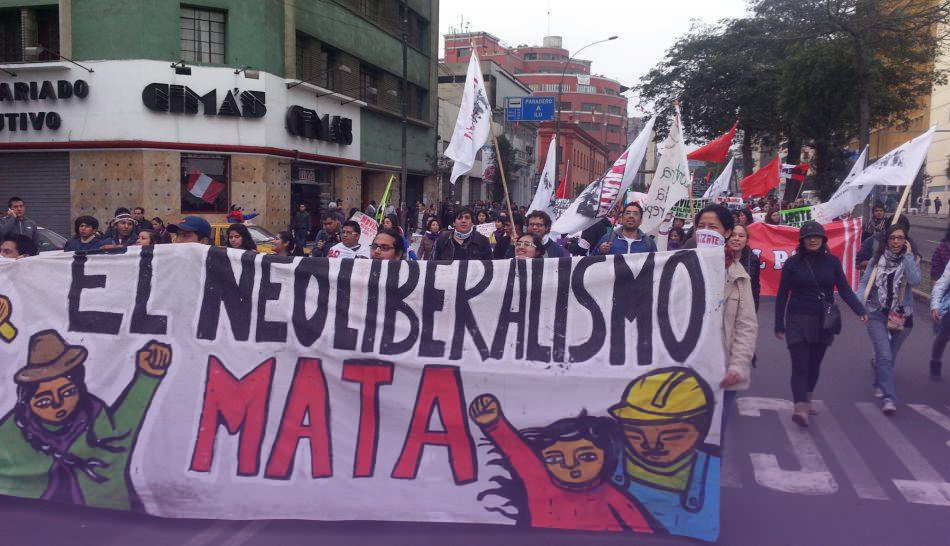 Latin America and the Caribbean: Regional Scenario and Challenges Toward Change

Latin America and the Caribbean have endured severe impacts due to the pandemic, as it has laid bare the horrific face of capitalism and its profound structural crisis. As we experience a condensed form of the predicament that is inherent to capitalist relations, the contradiction between capital and life has never been so clear. This is the region that has been most brutally ravished by the coronavirus pandemic: more than 45 million cases and nearly five million deaths. Due to digital exclusion, millions of families were unable to access online education or work from home. Inequality has risen in the most unequal region of the world.

Twenty percent of the population owns 83 percent of the wealth, land, and media, while 86 million people live in extreme poverty. We were coming from five years of economic stagnation before the pandemic hit; 45 million new poor were incorporated into the reserve army of capital; the GDP dropped 8 percent; and as the main sources of jobs for impoverished sectors were shut down, labor became increasingly precarious, with gruesome setbacks for labor rights. These are just some of the manifestations of a crisis in which COVID-19 is a catalyzing agent.

The Dimensions of the Crisis

At the core of its economic dimension, there are productive processes of financialization and distribution that are completely disconnected from the needs and problems of the peoples. The hegemony of capitalist values that benefit only a few has managed to conceal the exploitation of the large masses of workers and render invisible 231 million poor people and 11 million unemployed households.

Now the very spokespeople of capital are claiming that the neoliberal capitalist growth model is coming to an end, arguing about reforming capitalism. They will try to recycle it again, this time resorting to the state, which is no longer seen as a necessary evil.

Three characteristics seem to be quickly on the rise. First, an interest in growing profits with no commitment to production processes. Second, the increasingly profound power asymmetries regarding the access to, consumption of, and control over technologies. And finally, the overload of remote work added up to care work, as new ways of exploiting women’s bodies are silently organized.

Its environmental dimension is a consequence of the logic of production, plundering, expropriation, and spoliation under capitalism. Not only climate change, but also the so-called natural (actually social) disasters and the very emergence of the virus are, to a great extent, due to this imbalance.

This is the result of an omnipresent market, to where everything that exists is destined—land, water, biodiversity, the commons. The food crisis derives from an agricultural model that is not only unable to eradicate hunger, but it also reduces the diversity and sources of life. This crisis challenges us to focus on the discussion about the right to land, food sovereignty, agroecological production of food, native seeds, and peasant farming practices.

Its social dimension is the expression of the logic of appropriation, accumulation, and concentration of wealth, with the old rhetoric about the necessary drivers and the pouring out of wealth that ultimately never happens. Inequality, discrimination, expropriation, violence, and forced migration to flee hunger and poverty are more and more on the rise. A narrative emerges about social injustice being irreparable or this evil that has knocked us all down. But this discourse conceals the cause of social injustice and the ones responsible for causing it.

The political dimension of the crisis is clearly felt as the bourgeois state deteriorates. It is convenient for capital to have a state aligned with the interests of monopolies, to have only the bare minimum of the necessary peace and balance to make sure profits are protected. A state that resorts to penal law against those who oppose it, with no regard to what is fair or public. A state that tends toward this crisis, subjected to private monopolies, not as an entity dedicated to nationalization or the creation of jobs and fortunes. It nurtures the image of democracy as an obstacle, while judges, media outlets, churches, and outsiders seize politics and apply growing doses of repression and criminalization against those who challenge and denounce them.

The dimension of ethics and values is felt in everyday life, as the meanings of common and collective are displaced due to private property, individualism, and selfishness, which generates uncertainty, a feeling of abandonment, loneliness, orphanhood, and overall discomfort in our societies. The notions of humanistic sensitivity and hope are hit by crisis when the future looks too uncertain.

How Can We Change the Course of Things?

As it acknowledges the decline of its own authority, the United States is making an effort to rebuild its rule over the region with active diplomacy, a power of survival over financial systems and a military power based on the world’s largest budget. The Democratic government, with its “civilized” rhetoric, is trying to graciously rebuild its dominance, striving to challenge the presence of China—which is already the biggest commercial partner of several of our countries. Transnationals and new centers of power intend to connect us to their system of reproduction.

Allying to them, the project of conservative restoration and their leaders—now facing a legitimacy crisis—are gaining ground in recent years. Neoliberalism has not presented a convincing alternative to the peoples. The rise of the right to governments is not lasting as much as they expected, as they lack a welfare project.

However, the conservative ideology is gaining ground across the region. It enjoys relevant support from evangelical sectors, which have penetrated the poor segments of our peoples with their neoliberal, patriarchal, homophobic, racist, and conservative mindset. Social media play a substantial role feeding the culture of hatred, polarized confrontation, the personalization and fragmentation of causes, and the attempt to dismantle critical and decolonizing thought. They claim for freedom of thought and expression, but only within homogeneity and emptiness.

On the other hand, we must acknowledge the emerging social and mass struggles taking place in nearly every country—political and democratic struggles that are fighting back against precarious living conditions, focused on the struggles for employment, vaccines, and basic income for all.

The victory in Chile to change Pinochet’s Constitution offers us lessons on what can come from the combination of struggles from within institutions and through mobilization out on the streets. The same is true for the struggles against the International Monetary Fund (IMF) and the neoliberal measures in Ecuador; the re-establishment of the project by the Indigenous peoples from the grassroots in Bolivia; the struggle against the neoliberalism of war in Colombia, spearheaded by students and youth; the triumph of Pedro Castillo in Peru amid so many challenges; Cuba and Venezuela’s resistance against the monstrous machine of a blockade that is in place to disallow revolutionary and counter-hegemonic projects, followed by a communication strategy that stigmatizes these processes of struggle; the massive demonstrations in Haiti, as millions of people denounce a crisis caused by plundering and the occupation.

I will underscore the longstanding struggles against patriarchy waged by feminist movements, with strong mobilization and ability to challenge the system as a whole. Through organizational and educommunication policies that promote cross-sectional and intersectoral analyses, they unveil the multiple forms of oppression and make a commitment to mobilizations and practices on the ground.

The grassroots environmental movement and the peasant and Indigenous movements position themselves as actors entitled to rights, reclaiming the right to land. Meanwhile, they stand up for food sovereignty and environmental justice at the core of the demands for just societies.

In many countries, student, youth, and urban movements have a strong ability to engage with the people. An agenda of justice is galvanized in labor unions and the labor world. Once again they denounce debt and a commitment with a new international financial architecture.

These agendas are being interlaced with a systemic denunciation and practices to promote joint efforts with different networks and organizations. On the foundations of this struggles lies the right to land and food, decent work, housing, living in peace, rebuilding democracy, health and education, freedom of movement, and more.

However, we cannot overlook the fact that most of our organizations enjoy a fragile balance. The forces of movements in many countries are yet unable to change the correlation of forces. The meanings and depths of changes and results of the struggles will not depend on states and their institutions—although their contribution is key—, but rather on the correlation of forces and the behavior of social classes. We need new forms of political organizing and programs that can represent the working class.

We are tasked with developing political and ideological education from praxis, with points of reference in historical memory, grassroots clamor, spirituality, and critical thought. No dogmas nor manuals, no institutionalizing education—we will make it a continuous cultural and political movement. In the region, there are more than thirteen schools working in a combined effort toward a strategy of unity, which in turn promotes a conversation with schools from around the world about sources of theory, content, and methodology.

We promote processes of grassroots and feminist economy. These are experiences that encompass nearly 60 percent of the working class, who live and struggle with a different notion of the market, with social relations that are outside its logic, whether in the cities or growing agroecological food with food sovereignty. This goes hand in hand with building solidarity that integrates the fragmentation of the grassroots actor as a fundamental mission. Nurturing hope is an internationalist task.

Dedicating energy to international anti-imperialist platforms that point to multiple polarities is a strategy to solidify a progressive regional bloc that can accelerate the hegemony crisis endured by the United States. We have to fight for justice toward the recognition of broader citizenship, with a vision of rights that is more closely connected to grassroots needs. Fighting for the state is something we do while we continue to take to the streets and the territories to build a historical bloc: to identify strategic allies and continue to strengthen relationships that will make our struggle stronger.

With this in mind, we combine the strength of mobilizing actors emerging from the frustration over capital with anti-systemic and anti-imperialist agendas and actors. It is our role, as movements, to promote the bridge between the outrage and the everyday struggles for survival with strategic organizing against imperialist power.

Llanisca Lugo is a member of the Martin Luther King Center (Centro Martin Luther King—CMLK) and the World March of Women Cuba. This article is the result of an analysis of collective and consensus-building processes carried out in several spaces in which the CMLK takes part, including ALBA Movements, the International Peoples’ Assembly, the World March of Women, Jubilee South, the event Emancipatory Paradigms (Paradigmas Emancipatorios), and the 3rd CMLK Latin American School (3.ª Escuela Latinoamericana del CMLK).